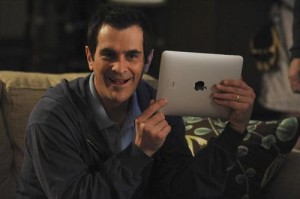 On Wednesday night, the ABC breakout hit Modern Family featured a storyline where geeky dad Phil Dunphy wants nothing more for his birthday than an Apple iPad. The entire episode featured the rest of the family trying to get it for him, with scenes set in Apple Store lines and numerous characters waxing rhapsodic about the new product. Fans were furious at the shameless product placement. On IMDB, a typical post reads “Tuned in for comedy, sat through a 30 min ipad commercial…” while TV critics like the Star-Ledger‘s Alan Sepinwall, called the references “icky”.

All the angry viewers, however, will be shocked to read this LA Times article, and learn that there was not product placement. The storyline was completely created by the writers of the show and Apple paid them nothing.

Since it’s debut this Fall, Modern Family has been one of the most successful and beloved of the new shows on the air. It’s unsurprising, then, that proprietary fans weren’t happy with what seemed like corporate meddling. They had reason to be suspicious too. Product placement has become so ubiquitous on television these days and Steve Jobs is on the board of directors at Walt Disney Co. Plus, when the show has dealt with Phil’s tech love before (like the episode where his wife tries to figure out his remote control) specific products were never mentioned in such detail.

However, Apple spokesmen have claimed that they don’t pay for product placement on shows (and with the tsunami of media fanfare each of their products gets, why would they need to. So, now fans who were angry at the episode have to watch it with new eyes (ones that aren’t clouded with outrage) and decided if the storyline works on its own. Joe Flint, the author of the LA Times piece, thinks it did while Sepinwall, even after he was told it wasn’t a paid ad, still wasn’t thrilled.

The truth of the matter is, the plot line did fit the Phil character. And the show does have the word “Modern” in its title, so one would expect the episodes to have some specificity to the times they were made in. However, hearing the name of a product used during a piece of entertainment that many times is bound to rub some people the wrong way and the producers could easily have used a thinly-veiled fictional facsimile (TV writers of the world, we bequeath to you our hilarious idea “Tangerine Tablet”. Your welcome).

It’s a tough choice to make. One of the first things a comedy writer is taught is that specifics make everything funnier. If you’re going to write a joke about a guy spilling his drink, changing it to a guy spilling his Mike’s Harder Lemonade is bound to make it better. But, do this too much, and an audience that is already wary of the deluge of ads they receive on a daily basis might turn on you assuming your on the take.

The Modern Family story is similar to the situation 30 Rock fans found themselves in last year when all the characters spent a Valentines Day episode touting the virtues of the McDonalds McFlurry. Their anger turned to confusion when they learned that the mentions were not another product placement (something 30 Rock is known for having and writing clever jokes around) but just a story written by the writers.

So, like the 30 Rock audience, fans of Modern Family can’t get angry at the network for this one. Now, that giant, red “V” with the ticking clock that blocked part of the screen during Lost the other night, that’s another story…