Ira Glass Comes To DC To Argue Against NPR Bias 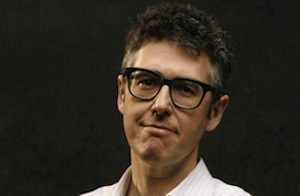 If NPR won’t fight back against charges of bias, Ira Glass will.

The This American Life host already took to NPR’s On The Media to submit his rallying cry, arguing to host Brooke Gladstone that “we have nothing to fear from a discussion of what is the news coverage we’re doing.”

This past weekend, he continued on in this vein, fighting against the notion that NPR, as Bill O’Reilly put it, has “devolved into a totalitarian outfit functioning as an arm of the far left.” In front of a sold-out theater at George Washington University’s Lisner Auditorium, Glass said it was NPR’s “decentralized system” that has tied its hands in being able to fight back. “There’s NPR that produces the big news shows like Morning Edition and All Things Considered,” he said. “Then there’s Public Radio International, American Public Media, there are all these sorts of various distribution channels, and then everyone can pretty much make a show — for instance, our show is made by Chicago Public Radio. Car Talk is out of Boston. The strength of the organization is the decentralization. But what happens is in a moment like this, nobody’s in charge, nobody’s in charge of saying, ‘Ok, it’s time to take out ads and get people on talk shows to say the truth,’ which is to say that the work we’re doing is not biased. So what we have is what Jon Stewart called “bringing a tote bag to a knife fight.'”

Glass’s words were in reference to efforts from the GOP to defund NPR and its member stations, a long-time goal of Republicans that reached a fever pitch after the organization’s firing of Juan Williams, followed by James O’Keefe‘s release of a highly edited video of a top NPR executive spouting his dislike of the Tea Party to a hidden recorder.

Glass told the Lisner audience that he decided he would be willing to put his claims to the test. “I said yes, let’s measure, because I’m 100 percent sure that if we measure it, we have nothing to fear,” he said. “And then came about two weeks of harrowing emails with conservatives. I got flooded with emails from people who say, ‘Well of course it’s biased,’ and I started to drag those people into the studios to talk to them for On The Media. And then finally in the last week of this project, Brooke [Gladstone] got statistics. She went out and found every study that has been done about bias in public radio, and it turns out in every measurable way there is no bias.”

The host cited a study from Fairness & Accuracy In Reporting (FAIR) that found if you simply count the guests on public radio shows, they break down into 60 percent Republicans and 40 percent Democrats. “That’s regardless of whether if Republicans or Democrats are in the White House or Congress,” he elaborated. Glass also referenced a study from Pew that monitored 50 major news outlets to see how each covered Obama’s first 100 days in office. “It found that 28 percent of the stories on NPR were positive about Obama versus 37 percent in the media generally; 52 percent of NPR’s stories were neutral or mixed versus 40 percent in the media overall; 21 percent of the stories were negative about Obama versus 23 percent in general. So bias at NPR would lean more toward neutrality.”

Of course O’Reilly and his followers would argue that you can’t quantify the bias in news, that it can only be measured in the nuance of how a reporter asks a question or asserts a fact. Many of the conservatives Glass interviewed echoed this sentiment. “We had people keep diaries for a week where they list every instance when you wince when you think there’s bias,” he said. “One of them that was really fascinating was when Michele Norris was interviewing a CEO, and he said that a company that builds factories in the United States shouldn’t have to pay taxes in exchange for that. And Michele Norris responded, ‘Can we afford that?’ and to the conservative listeners, many of them said, ‘There’s the bias right there.’ It shows that she’s pro-tax. But Brooke and I as reporters said no, if she had a liberal organization on who said we need to spend more on something, [Norris] would ask the same question. And if you think of that same CEO, if he were on Fox News right now with all the yelling about the deficit in all the daily news, it’s hard to believe even a Fox News anchor wouldn’t ask this. What it taught me is that it reallly is in the ear of the beholder, and we’re not going to agree with our listeners on some of these moments.”

There are limits to how far Glass will go to defend NPR, however. Asked by an audience member what This American Life would do to fight for continued public radio government funding, Glass shrugged his shoulders.