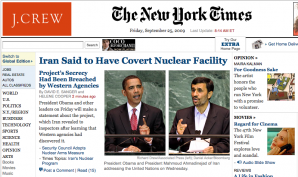 Remember the days when newspapers were able to break big stories? Actually that day is today. Looked at the home page of the New York Times yet this morning? Wow. (Actually, the front page of the print edition is no picnic either, welcome back 2002!).

Sometime overnight, (around 4am, judging by the buzz on my TweetDeck), the Times‘ David E. Sanger broke the story that President Obama — along with the leaders of Britain and France — intend to “accuse” Iran of “building a secret underground plant to manufacture nuclear fuel, saying the country has hidden the covert operation from international.” From the article:

President Obama and the leaders of Britain and France will accuse Iran Friday of building a secret underground plant to manufacture nuclear fuel, saying the country has hidden the covert operation from international weapons inspectors for years, according to senior administration officials….American officials said that they had been tracking the covert project for years, but that Mr. Obama decided to make public the American findings after Iran discovered, in recent weeks, that Western intelligence agencies had breached the secrecy surrounding the project

This is enormous news. Enormous. So much so, one imagines it will not only “overshadow the meeting of the Group of 20” as the Times suggests, but will likely knock the health care debate off the front pages for the next few days at least. Between this and the “serious” terror plot case happening in New York City right now (see A-1 print edition) scary international news may have returned to rule the headlines after a summer domestic news topping the agenda. Also, when the President tells reporters not to give him to much grief over his “jackass” remark because he’s “got a lot of other stuff on my plate” he really means it! Alas, too bad Glenn Beck can’t also use his powers (such as they are) to get international politicians to resign.

This is the second time this week big Middle East news has been broken by the traditional media. On Monday the Washington Post‘s Bob Woodward penned an exclusive account of Gen. Stanley McChrystal’s 66-page report to the President, which warns that more troops will be needed in Afghanistan if the U.S.’s policies there are to succeed. Following this news was the news that the Post had delayed publication of the story for one day a the request of the Pentagon.

Two lessons here: One, newspapers still have the clout, wherewithal, and trust to do the digging and get the really big, really important stories. Two, the fact I feel it’s worth noting that the traditional media has broken not one, but two really big stories this week probably says more about the state of newspapers than six months worth of bad advertising numbers.