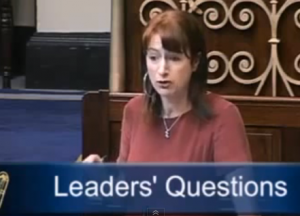 President Obama was in Ireland earlier this week for the G8 summit, but at least one Irish politician is not happy about the visit. Clare Daly, a member of the Irish Parliament, tore apart both Obama and the “unprecedented slobbering” over him and his family during their visit. She called the U.S. president a “war criminal” who can hardly claim to be promoting peace, and called out the Taoiseach (the Irish prime minister) for pimping out Ireland for Obama, saying the Irish government is “prostituting ourselves in return for a pat on the head.”

Daly mocked the “sycophantic fawning” over the Obama family by the media and political establishment, and questioned how serious Obama’s commitment to peace really is.

“Is this person going for the Hypocrite of the Century award? Because we have to call things by their right names, and the reality is that by any serious examination, this man is a war criminal.”

She brought up Obama’s decision to provide arms to the Syrian rebels and his use of drone strikes, accusing Taoiseach Enda Kenny of turning a blind eye to these acts. Daly declared, “You have showcased us as a nation of pimps, prostituting ourselves in return for a pat on the head.” She told him that she was even concerned he would present Obama with leprechaun hats with stars and stripes just to please Obama.

She demanded to know what Kenny would do to show that Ireland is not merely the “lapdog of U.S. imperialism.” Kenny called her comments “disgraceful” and insulting, but Daly stood firm, continuing to hammer Kenny for letting the United States “pimp… this nation as a tax haven for their corporations.”

Watch the Daly’s full remarks, and her back-and-forth with Kenny, below: