Is Adam Lambert Too Gay? Or, Not Gay Enough?

Is Adam Lambert Too Gay? Or, Not Gay Enough? 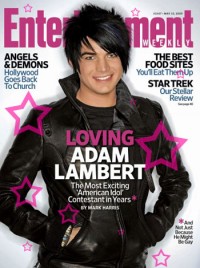 Who knew that the cover of a gay magazine could put everyone in such a bad mood.

Adam Lambert used an interview with Entertainment Weekly to respond to allegations made earlier in the week by Out magazine editor Aaron Hicklin that Lambert didn’t want to be seen as “too gay” in the magazine devoted to being, well, openly gay.

Lambert told EW’s Whitney Pastorek that “I didn’t want to jump onto a gay magazine as my first thing, because I feel like that’s putting myself in a box and limiting myself. It was my desire to stay away from talking about certain political and civil rights issues because I’m not a politician. I’m an entertainer.” He also said he wasn’t terribly political and that Hicklin was trying to force an agenda on him that he didn’t want.

The battle between Lambert and Hicklin began earlier in the week when Hicklin said Lambert’s people were afraid Adam would appear “too gay” on the cover of Out magazine in its Out 100 annual listing and only acquiesced when Cindy Lauper was tossed into the picture. In a testy open letter, Hicklin says they tried to get Lambert during American Idol and he seems to resent that Lambert’s people thought a feature in the straight-but-curious rival Details was a better approach than on the cover of a magazine called, well, Out.

Someone has to be first, and we’re all counting on you not to mess this up. You have to find your own path and then others can follow. We just hope it’s a path that’s honest and true and that you choose to surround yourself with people who celebrate your individuality. The irony is that right now it would be easier to get Kris Allen to do a solo cover shoot for us. But only because he’s straight.

There’s no doubt that Lambert’s rise from Idoler to gay rock star is an important milestone for the entertainment—and gay—world, and one senses he gets that from his interviews with Out. But writer Shana Naomi Krochmal says that in all her time doing celebrity journalism, she’s never been met with the “you know, gay-gay” concern about how an interview was going to be done. She also isn’t apologetic for Hicklin’s outrage, explaining “[w]e’re witnessing a changing of the guard, and it’s bound to overlap a bit in the middle, creating these strange moments where we work with both proudly out stars and their reluctant handlers, sometimes at odd with each other even when they have the same ultimate goals.”

Adam went on the defensive, tweeting “Dear Aaron, it’s def not that deep. Chill! Guess ya gotta get attention for the magazine. U too are at the mercy of the marketing machine” and“Until we have a meaningful conversation, perhaps you should refrain from projecting your publications’ agenda onto my career.”

It’s easy to think that Hicklin’s being a little dramatic over this, but he also has a point. Lambert is a significant cultural figure in 2009, yet the glass closet doors of his life have been frustrating to watch, on several counts. Lambert decided to have his “Yep, I’m Gay” moment in Rolling Stone, not in the LGBT press. He did Details before he did Out or the Advocate. In some ways, it seems like his sexuality is still being carefully stage-managed by his handlers, whether they work for Fox or not.

But celebrity journalists were amazingly coy in handling Lambert, even during the American Idol run. No one seemed to want to ask him directly whether he was gay or not. It was the question on everyone’s mind and he was free not to answer, yet the question never got asked. Maybe he was being so heavily handled that no one dare ask the million dollar question. Or maybe the press was just afraid to “go there,” treating the superstar-in-waiting like he’s a Congressman from Nebraska who shouldn’t be questioned about his personal life.

You see that sentiment in Michael Slezak’s take on the controversy in EW’s PopWatch blog. Slezak accuses Hicklin of whining and advancing the “notion that because Adam is gay, and because he’s a celebrity, he therefore carries some kind of responsibility to advance the social agenda of the LGBT community. Reminder: He’s a singer, not a politician. And the simple fact of his being open about his sexual orientation is, in and of itself, a highly charged political act in these very volatile times.”

Well, EW and Out have different purposes, although probably a lot over subscriber overlap. Out’s mission is to promote the LGBT community and culture, while EW’s is to cover entertainment. They are going to exploit the Lambert phenomenon in different ways. In the middle, it seems, is Lambert whose comments to EW sound like what you’d expect from a 27-year old guy whose being forced into the limelight while wrestling with being openly gay.