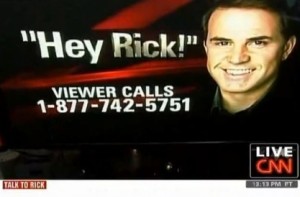 Looks like the failed terror attack of Flight 253 has brought xenophobia back in vogue! Already numerous columnists and opinionators have voiced an eagerness to begin profiling at airport security lines. Even producers at CNN have gotten in the act, though not through the booking of guests, rather, through the broadcasting of a caller during Rick Sanchez‘s show yesterday.

In what appeared to be a segment called “Hey Rick!” — as the show came back from commercial — we heard the voice of a caller giving his “solution” for increasing airport security:

“I think if your name starts or ends with Abdulla, Abib, Ahmed…Ahmedjad…any of those names, you should not be allowed to fly into America. And if so, you should be taken into a private room and do a body search and x-rays, so we totally know that you’re clean.”

Sanchez followed with “Some people are perfectly comfortable with what that man just said. Others say that would be profiling, and might be un-American as well. It’s an interesting argument,” before promoting a show that was set to air at 8pm last night.

Interesting argument? One could wonder how that comment describes anything BUT profiling, based on either race or religious belief? To be clear, this was not a live call-in, but rather a prerecorded message that was specifically chosen by producers of the show.

So, what’s more interesting is how this sort of short-sighted and jingoistic comment found its way on CNN, a network that has proudly asserted that they do real news, avoiding opinion journalism for their competitors Fox News and MSNBC. Perhaps executives have found a way to make their shows more interesting and relevant and have decided to be more like another successful form of media: Talk-format radio programs found on the AM dial.