It’s Complicated: Obama Has Received The Most BP Cash 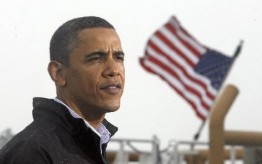 The Obama administration is really, really determined for everyone to stop making those Katrina comparisons. This morning the White House posted a 6,300-word chronology of ‘The Ongoing Administration-Wide Response to the Deepwater BP Oil Spill‘ — can you ever imagine a similar move on Bush’s part two weeks after Hurricane Katrina? — in order to give the American people a “clear understanding of what their government has been and is doing to respond to the massive and potentially unprecedented environmental disaster.”

One imagines this is the White House’s way of taking the air out of the media’s Katrina meme balloon — 6,300 pricks at a time. However it may not matter. There is simply no way this story is not going to be politicized in one manner or other, and this morning’s report that President Obama was the recipient of the most amount of BP campaign contribution cash provides a fresh new angle to spend the day hammering in. This from this morning’s Politico:

BP and its employees have given more than $3.5 million to federal candidates over the past 20 years, with the largest chunk of their money going to Obama, according to the Center for Responsive Politics. Donations come from a mix of employees and the company’s political action committees — $2.89 million flowed to campaigns from BP-related PACs and about $638,000 came from individuals.

On top of that, the oil giant has spent millions each year on lobbying — including $15.9 million last year alone — as it has tried to influence energy policy.

During his time in the Senate and while running for president, Obama received a total of $77,051 from the oil giant and is the top recipient of BP PAC and individual money over the past 20 years, according to financial disclosure records.

You can see where this is going…likely straight to Rush Limbaugh’s radio show. As Jon Stewart so ably demonstrated yesterday the media loves numbers, and these I imagine will prove to be rather uncomfortable for Obama. Combined with his decision earlier this year to expand off-shore drilling one suspects he’s going to have some tough questions to answer in the next few days, ones that have nothing to do with Katrina. On This Week on Sunday Bill Maher said he was looking forward to seeing Obama do some serious backpedaling on the oil issue: “a flip flop I can believe in.” This is the sort of story that might inspire that to happen sooner than later.