Does the NSA Look at My Nude Photos? 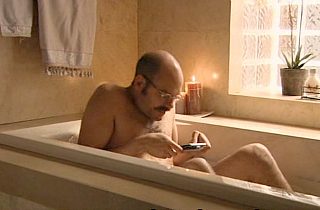 My friends and I have long had a joke when we’re talking over email about something of, let’s say, questionable legality, vis a vis the procurement of certain frowned upon substances, where we address a hypothetical government agent checking in on the conversation. “Hey man, what do you think we should do tonight?” we might ask, like libertine supplicants addressing a present but indifferent deity.

This is also applicable during discussions of a more amorous nature over text or chat. I’m sure you’ve done variations on it yourself. In the latter, it’s a sort of acknowledgement of what we’ve all long known is technically a possibility, but didn’t really think was going to happen. Nonetheless, somehow, saying it out loud was reassuring, like an ironic spell that wards off prying bureaucratic specters.

Turns out the spell doesn’t work.

NSA whistleblower Edward Snowden‘s revelations over the last year or so have confirmed most of our fears about the extent to which the government is actually prying into our private lives. His document dump was like biting into the apple in the Garden of Eden, except in this latest revelation, we aren’t suddenly aware of our own nakedness, it’s that the NSA is aware of our nakedness. In a new interview with the Guardian, Snowden explains, among many other things, that people like himself not only have access to all of our private correspondence, including those of the illicit sort, but also view this as a perk of the job. This should come to the surprise of absolutely no one, but hearing it confirmed is nonetheless chilling.

You’ve got young enlisted guys, 18 to 22. They’ve suddenly thrust into a position of extraordinary responsibility, where they now have access to all of your private records. Now, in the course of their daily work, they stumble across something that is completely unrelated to their work in any sort of necessary sense. For example: an intimate nude photo of someone in a sexually compromising situation, but they’re extremely attractive. So what do they do? They turn around in their chair, and they show their coworker. And their coworker says, “Oh, hey, that’s great. Send that to Bill down the way. And then Bill sends it to George, George sends it to Tom, and sooner or later, this person’s whole life has been seen by all of these other people.

He goes on, confirming that he’s seen it happen:

NSA spokesperson Vanee Vines neither confirmed nor denied this sort of thing takes place in a comment to Forbes:

NSA is a professional foreign-intelligence organization with a highly trained workforce, including brave and dedicated men and women from our armed forces,” she said “As we have said before, the agency has zero tolerance for willful violations of the agency’s authorities or professional standards, and would respond as appropriate to any credible allegations of misconduct.

I’m sure there will be dozens of moralizing scolds popping up to remind us that if we don’t want private images of ourselves seen by other people, we shouldn’t share them with anyone in the first place. And, sure, that’s technically true, but abstinence-only warnings are simply not a realistic course of action at this point. I’ll certainly think long and hard before sharing anything of a sensitive nature in an email myself going forward.

But that doesn’t mean I won’t ever do it. For example, I’m going to send one out right now, and perhaps it will find its way into the hands of some of Snowden’s old work pals. It’s an extreme closeup of me bending over with the camera point up my ass. I suggest we all do the same all at once. It might make them a little more hesitant to open the picture file next time.