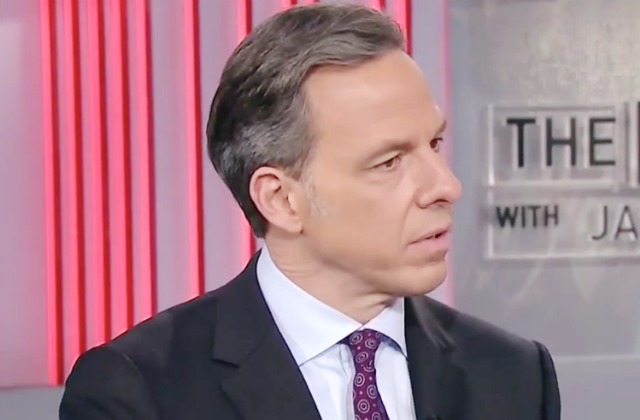 On Tuesday, CNN’s Jake Tapper blasted leftists who slimed Bob Owens on Twitter, after the news broke that the pro-Second Amendment blogger reportedly committed suicide by a self-inflicted gun shot.

Tapper first re-Tweeted a post from Townhall.com’s Matt Vespa, who had linked to an item by Ed Morissey. The HotAir writer paid tribute to his “colleague and…friend” Owens, and linked to a GoFundMe page for the deceased activist’s family.

The CNN anchor also posted his own message of sympathy on social media.

For family and friends of @bob_owens — so sorry for your loss. Horrible news.

Four hours later, Twitter user/podcaster Will Menaker responded to Tapper by pointing out a February 2017 post by Owens that attacked Trayvon Martin as a “3rd world thug.” Menaker sarcastically added, “Yes Jake, this is indeed a terrible loss.”

Tapper responded just a minute later by rebuking the podcaster.

@willmenaker @bob_owens I didn’t like everything he said or did but he is now dead and he left behind a wife and children. Go find some humanity.

This post provoked responses from several Twitter users with blue checkmarks. Canadian actor/screenwriter Jacob Tierney chimed in minutes later and accused the Jewish journalist of having sympathy for the supposedly racist supporters of Owens.

It only took Tapper six minutes to respond with his “dancing on the grave” blast.

@jacobtierney79 @willmenaker @bob_owens I have no idea what you’re talking about. All I’m seeing is a lot of liberals dancing on the grave of a conservative. It’s sickening.

@jaketapper @leyawn @willmenaker @jacobtierney79 @bob_owens It is not a binary choice between celebrate or mourn. You could have also chosen silence.

Tapper wasn’t the only person blasting the ghoulish Tweets about Owens’s death. Townhall.com’s Kurt Schlichter unleashed in a Twitter post on Tuesday afternoon.

The disgusting liberal response to the death of Bob Owens validates his point about why normal Americans should never disarm.