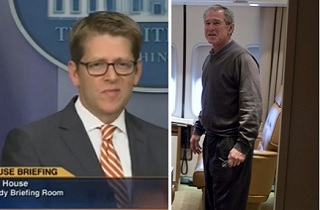 At Thursday’s White House daily briefing, Press Secretary Jay Carney was asked if President Obama had any opinion of former President George W. Bush‘s artwork, which Bush is seen proudly displaying aboard Air Force One in an official White House photo. Carney replied that he “didn’t hear him comment on that,” but offered his own assessment.

RealClearPolitics correspondent Alexis Simendinger first asked Carney to sum up the earlier 15-minute digression on photographer access to the President. “Because it blew up in the briefing so publicly, can you close the loop on what the President believes, himself now, that he’s aware that this is a public issue? Does he believe that the white house photography is sufficient?” she asked.

“No, of course not,” Carney replied. “I think the first thing I said when I got this question was that, from the President on down, and I mean that, there is absolute agreement that there is no substitute for a free and independent press reporting on a presidency, on the White House, on Congress, on the government. It’s essential. And that includes photography. And we will continue to work with photographers to address their concerns. So let me be clear. That is the view from the very top.”

“The second question is related to one of Mr. Souza’s photographs,” Simendinger continued. “We saw President Bush was sharing his new passion, his art, with those in the conference room. Can you tell us whether the President expressed some remarks or opinions about President Bush’s paintings?”

“I didn’t hear him comment on that,” Carney replied, “and as I said earlier, there were private conversations, I won’t read them out, and I wasn’t privy to all of them. But I think it’s been documented that former President Bush has spent a lot of time on that, and I think the results are pretty impressive.”

Asked if he had seen the paintings, Carney replied “I’m not going to get into conversations I might have had with the former president.”