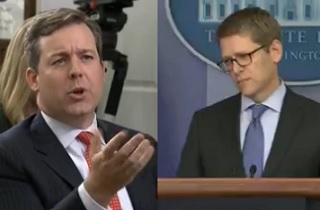 At Thursday’s White House daily briefing, Fox News Chief White House Correspondent Ed Henry revisited the topic of the metaphors being deployed around the current government shutdown/default debate, asking specifically about President Obama‘s use of a hostage metaphor during his speech today. Press Secretary Jay Carney reminded Henry of numerous examples of such metaphors by others, including one by Fox News’ Ed Henry, from Tuesday.

Henry began by asking Carney about President Obama’s remarks on market reaction to a default. “What you’re saying about all the potential bad consequences, on top of that treasurer’s report John mentioned that said the crisis would be worse than 2008, Washington should actually be more worried than they are right now,” Henry said. “Don’t both parties usually in times of crises, try to calm the country down? Why are you trying to make them more worried?”

A sarcastic Carney replied “I encourage you to test how it plays, Ed, if you go on the air and say, ‘America, chill out, default is not a big deal.’ It is a big deal, and the American people need to know that.”

Referencing President Obama’s 2011 speech at the Tucson memorial service, along with last month’s mass shooting at the Washington Navy Yard, Henry asked Carney “Is it good to say the american people are putting guns to their head?

Carney reminded Henry of Republicans who have used the same imagery, and added  “You, yourself, referred to Republicans shooting at themselves the other day in the briefing. I think that the people who watch this could probably get through that.”

Henry began to protest, but Carney moved on to the next question:

As it turns out, Carney was right, Ed Henry did use a shooting metaphor at Tuesday’s White House briefing, and he did it as he was pressing Carney on the same issue, the use of metaphors to discuss the shutdown and debt ceiling. He asked Carney about the use of metaphors like terrorism, arson, and extortion (a metaphor that Henry characterized as a “serious charge”), wondering “how does it help you get a deal if you’re calling Republicans ‘extortionists’ and ‘terrorists?’ How does it help?

Carney replied “I think they are attempting to extort the American people in many ways, and the economy, in order to get their partisan objectives. And I can only echo a Republican House member who accused his colleagues of being ‘suicidal lemmings.’ I mean, that was what he said.”

To laughter from other reporters, Henry persisted. “But the name-calling from here …the changing the tone… let them call whatever they want to call themselves,” he said.

“I think we can all establish that some of the harshest criticism of Republicans happening in Washington right now is coming from Republicans,” Carney replied.

“So let them shoot each other,” Henry replied, a serious charge. “My question is, what about changing the tone from here? No, really. Why can’t you rise above that?”

Here’s that clip, from C-Span: