On Thursday afternoon, multiple shots were heard outside the west end of the Capitol Building in Washington, D.C. In response, Capitol police were seen with guns drawn and shutting down the perimeter. Debate was suspended in the House, and Minority Leader Nancy Pelosi (D-CA) was notified during her speaking time. 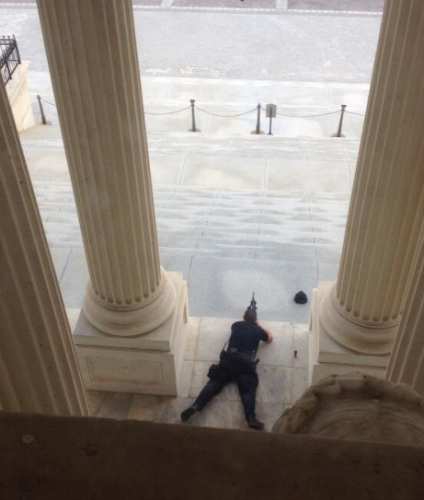 UPDATE: The scene from outside the Capitol, as seen on CNN: 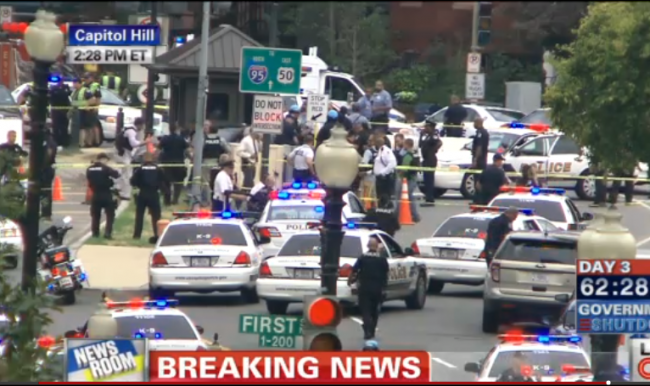 Tourists were reportedly told to run away from the scene. One man inside the Capitol captured an image of police running with machine guns:

No joke on Capitol Hill as Cops are running with machine guns as reports of shots being fired at Capitol pic.twitter.com/vdjAKkLP4y

UPDATE 2:53 p.m. ET: It appears as though the shooting came at the tail end of a police chase. ABC News reports that “Someone tried to ram gate at the White House, then fled to Capitol Hill. Shots were fired, but unclear by whom.”

UPDATE 2:55 p.m. ET: ABC News has more alleged details of the shooter who is reportedly in custody:

UPDATE 3:03 p.m. ET: CNN reports that both the Senate and House sides of the Capitol Building are no longer under lockdown.

#Breaking Photo of Car crashed into a guard shack near the #Capitol #Shooting. Unsure if its the suspect –@BerinSzoka pic.twitter.com/1d2fsCAXqw

And another photo of a “smashed-up police car”:

The smashed up police car: pic.twitter.com/g5qInZnJka

UPDATE 3:16 p.m. ET: CNN reports that there was a child removed from the vehicle that crashed into the police barricade. The driver herself is reportedly dead from multiple shots to the head.

UPDATE 3:18 p.m. ET: The “All Clear” has been given. Lockdown is officially over.

UPDATE 3:30 p.m. ET: The House of Representatives has reconvened.

Check the Mediaite homepage for additional details of the story, now that the active situation has ended.