Jay Carney on ‘Taking the Bait’ from Ed Henry and Jon Karl: ‘I’ve Got a Little Irish in Me’

Jay Carney on ‘Taking the Bait’ from Ed Henry and Jon Karl: ‘I’ve Got a Little Irish in Me’ 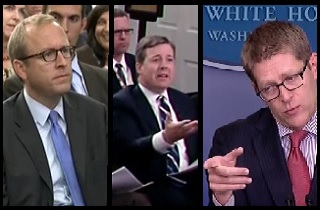 For the past year or so, White House Press Secretary Jay Carney has been consistently scraping up his knuckles on the relative objectivity of Fox News Chief White House Correspondent Ed Henry and ABC News Chief White House Correspondent Jonathan Karl, respectively. On Tuesday morning’s The Michael Smerconish Program, host Michael Smerconish asked Carney about the friction, and Carney confessed that he “sometimes take(s) the bait,” but that he recognizes it’s all in the game.

Smerconish told Carney that he thinks one of the hardest parts of being press secretary must be “keeping your temper in check,” and added “it seems to be a challenge. lately, as I watch your interactions with ed Henry and Jon Karl, in particular. Is it becoming more difficult to keep it all in check?”

“I would disagree with that,” Carney began. “I think that getting tough questions, and sometimes ‘Gotcha!’ questions is part of the job, you know, I’ve got a little Irish in me, there’s no doubt, quite a lot of Irish, actually, but I see my job as answering those questions, and explaining what the President is doing, and why.”

He added that “It doesn’t mean that I don’t take the bait sometimes, but they have a job to do, it’s a job I used to do as a reporter, I respect that completely.”

“Some of the back-and-forth in the briefing room is to be expected,” Carney continued. “Some of it’s theatrical, as I think you know, especially when TV correspondents are looking for a clip for their piece, but that’s fine, it’s part of it, I don’t mind it.”