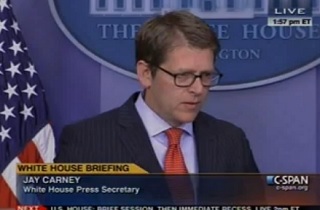 The mass shooting at the Washington Navy Yard has revived the media’s interest in gun regulation, and while the President failed to explicitly reference the issue in Monday’s remarks on the unfolding tragedy, he did prick up some ears by referring to “yet another” mass shooting. At Tuesday’s White House daily briefing, Press Secretary Jay Carney fielded a question about the record of shootings during President Obama’s tenure, and turned it against Republicans who voted down gun regulation.’

“Navy Yard, Newtown, Tucson, Aurora, Fort Hood,” CNN Chief White House Correspondent Jim Acosta recited, “is the President concerned that his administration will be marked by an inability to resolve this issue of mass shootings?”

“The president believes, and I think has shown, that we ought to do everything we can to implement commonsense measures to reduce gun violence in America,” Carney replied, citing the Biden Task Force’s recommendations, and the executive actions that resulted from it, including two that were rolled out at the end of August.

Carney added that the President “has not, in the least, hidden his displeasure and disappointment in Congress for its failure to pass legislation that’s supported by 80% to 90% of the American people,” and blasted Congress for serving the “narrow special interest” that opposes things like universal background checks.

He insisted that the President and his administration “are continuing to push the cause. a common sense — again, I can recite to you, I’m sure CNN covered it in detail all day long, the executive actions that this administration took to further reduce gun violence in America.”

Carney got the percentages about right. Including Independents who caucus with the Democrats, 92% of Senate Dems voted for the Manchin/Toomey background check bill, while 91% of Republicans voted against it.

Gun regulation proponents, however, might be a bit discouraged by the White House’s seeming reluctance to embrace this latest tragedy as an impetus for a renewed push on gun regulation. Some saw the President’s frustrated invocation of “yet another” mass shooting as a possible indication of that, but Carney took pains, during Monday’s briefing, to dampen that expectation:

Q On the Navy Yard shooting, I understand this is still an unfolding event and we don’t know all the details. But the President himself just now at the top of his remarks talked about how we’re confronting another mass shooting. So just to be clear, is there an expectation in the White House that this kind of an event is something that could prompt a renewed White House push for these gun control measures that we know the President supports?

MR. CARNEY: I think what I just said remains true just a few minutes later, which is this is an ongoing investigation. It’s an ongoing situation on the ground. And there are law enforcement officials right now dealing with this, doing everything they can to make sure people here in Washington are safe, people around the incident are safe. So it would be inappropriate to try to put in context something about which we have so few facts.

Q It just seemed that he was beginning to do that when he said we’re confronting another mass shooting.

MR. CARNEY: I think he said that we have another mass shooting. I think by definition, when you have multiple fatalities, which is what was described by the Chief of Police here in Washington, D.C., that is a mass shooting. That’s a fact. What the other facts are, we don’t know yet. And we will await information about those facts.

Since Newtown (but not so much before), the President did put in some hard work on getting gun regulations passed, an effort that ran out of steam shortly after Manchin/Tommey was defeated. While Carney can point to that push, and to Republicans, as evidence that the President is doing what he can, the fact remains that the most recent concrete result of all the gun laws that have passed during his administration is a three year-old girl who shot herself in the head at Yellowstone National Park. While the true message of the recent recall of Democratic legislators in Colorado is still being hotly debated, there are two things that are certain: it demonstrates the energy deficit in the gun control debate, and it will not likely embolden other Democrats to lead on this issue.

Carney is right, Democrats are not the problem when it comes to enacting sensible gun regulations, but so far, they don’t appear to be the solution, either.