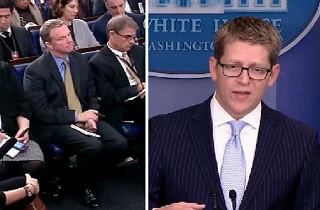 One popular talking point with opponents of the Affordable Care Act is the idea that people are being “forced to pay for” maternity care, even if they don’t need it, and even if they are a dude! At Tuesday’s White House daily briefing, Press Secretary Jay Carney fielded a question on just this point from ABC News’ David Kerley, and called out the absurdity of the premise.

“A portion of those folks, if they’re on the individual market now, and their plan isn’t grandfathered in,” Carney replied, “it’s because their insurer changed the plan, downgraded it, made it even less compliant with the Affordable Care Act, so I urge you to remember that, and when it’s reported, make that clear.”

“As the President said,” he continued, “a subsection of that slice will potentially pay more, because they earn too much to qualify for either Medicaid or the tax credit, and they’re getting substantially better coverage than they currently have. And the cost on the front end will be higher for that portion that might be paying higher premiums. again, a slice of a slice of 5%, but the overall cost for them will potentially be lower because they have better coverage, which will improve their health outcomes and potentially reduce their overall health coverage.”

“But that’s not what the President told them,” Kerley said.

“I’m not sure what it is you’re…” Carney began, over Kerley’s interruption, adding “Hold on. You’re confusing two things. The President never said that somebody who goes without insurance, but can afford it, would be paying less or the same, i.e. nothing. If you are somebody who you are 30 and young, and maybe are making decent money, but you just decided not to buy insurance, you are now required to buy insurance. So obviously, unless you qualify for Medicaid, even if you’re paying 50 bucks a month, a lot of young Americans will pay that little, you will be paying more. So he never said that everybody would pay less. If you’re saying that’s what he said, I don’t think you can find that.”

“You said these insurance companies have stripped these out, these are junk policies,” Kerley said. “Insurance companies were offering some coverage to these individuals who found that that was what they wanted.”

“They found that that’s all they had,” Carney replied.

“That’s what they wanted,” Kerley insisted. “A woman who doesn’t want children doesn’t have to have maternity. Now she has to have it. she couldn’t keep the policy that she had, and she liked.”

“David, this goes to the discussion I just had with Major,” Carney replied. “We absolutely accept the charge that we believe there ought to be minimum standards of coverage, preventive services, mental health services, maternity care, a ban – hold on – a ban on lifetime caps. It’s not just, there isn’t a plan out there that a female American searches on the individual market that doesn’t, that meets all of the minimum standards except for not applying maternity care. You know that doesn’t exist. These plans overwhelmingly have carveouts, they have caps, they don’t cover hospitalization.”

Carney successfully challenged the premise of the question, that exclusion of maternity care, or any other condition, was somehow done as a benefit to, and at the discretion of, consumers. Ryan Nelson didn’t look for a plan that would exclude maternity services, she simply wasn’t offered one that would include it, and was left on the hook for $16,000 by her pre-Obamacare plan.