Jeb Bush: ‘I’m Not Sure We Need Half a Billion Dollars for Women’s Health Issues’
video

Jeb Bush: ‘I’m Not Sure We Need Half a Billion Dollars for Women’s Health Issues’ 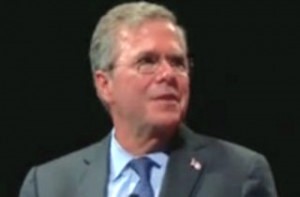 In talking about Planned Parenthood today, Jeb Bush made a comment about funding women’s health that ended up getting some fierce social media reactions.

Bush, at the Southern Baptist Convention, agreed that the next president needs to defund Planned Parenthood. He dismissed the idea of a “war on women” and “attacking women’s health issues.”

And in arguing that there are plenty of other organizations that “you could take dollar for dollar,” Bush said, as an aside, “I’m not sure we need half a billion dollars for women’s health issues.”

That got lots of attention and criticism on Twitter, including from his Democratic presidential rivals:

We actually need a heck of a lot more than $3 per person for women's health care, @JebBush. https://t.co/zz5Z3YJ18D

Bush ended up releasing a statement walking back that remark:

With regards to women’s health funding broadly, I misspoke, as there are countless community health centers, rural clinics, and other women’s health organizations that need to be fully funded. They provide critical services to all, but particularly low-income women who don’t have the access they need.

I was referring to the hard-to-fathom $500 million in federal funding that goes to Planned Parenthood – an organization that was callously participating in the unthinkable practice of selling fetal organs. Democrats and Republicans agree we absolutely must defund them and redirect those funds to other women’s health organizations.