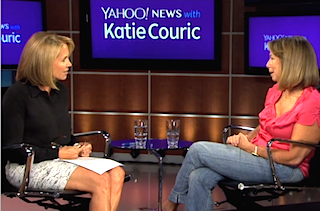 Former New York Times executive editor Jill Abramson followed up her interview with Fox News’ Greta Van Susteren this week by sitting down with Yahoo News’ Katie Couric for an extended conversation. But when Couric tried to get Abramson to speculate about why she was fired earlier this year, she wasn’t having it.

Couric did not even make it through her own theory about what might have happened when Abramson interrupted her. “Now we’re really in the grassy knoll, Katie, and I’m not going to jump in there with you,” she said.

Asked if she would ever write a book about her time at the paper, Abramson said, “I doubt it. I think there are maybe 20 people in the universe who would be interested in that.” Couric kept pushing for details, but Abramson said, “I have emerged from the grassy knoll myself,” and was not willing to say anyone about it.

Responding to a charge from her former colleague David Carr that The New York Times had become a “particularly bloody episode of Game of Thrones,” Abramson said, “It’s a newsroom. Most of the people there are trying to report on great stories. All of this, like, palace intrigue is really not the main event inside The New York Times, it just isn’t.”

Abramson waited more than two months after her firing to start speaking to television reporters about what happened. Less than two days into her media tour, she already seems beyond sick of talking about herself.

[h/t The Wrap]
[Photo via screengrab]