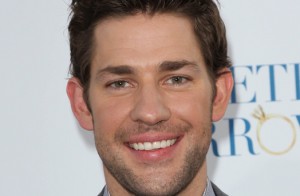 John Krasinski, best known as Jim Halpert from The Office, has feelings about the way people have politicized the Michael Bay-directed Benghazi flop 13 Hours. Krasinski, who stars in the film, told The Daily Beast that he’s “disgusted” by the way the movie has been politicized, mainly by people on the left:

“Now, I’d be naïve to say that people weren’t going to take this politically. If that was your agenda, and you wanted to see this movie politically through your own lens, you were going to do that whether we want you to or not. And that’s your right. What I don’t think is fair, and what I think is a shame—and actually I’ll go so far as to say a total dishonor—is to not at least acknowledge what this story is: acknowledging these six guys. These six guys need that acknowledgement, and they represent the men and women who serve all around the world. So by just taking this as a political football of ‘this movie is a total propaganda piece,’ you are robbing people of the ability to see what these men and women are actually going through.”

“I am actually slightly disgusted at the idea that applauding our military has become a political thing rather than universal,” he continues. “It’s universal. That should be an immediate acknowledgment, and then all the political opinions, conversations, and punditry is part of the process. I would never say we shouldn’t talk politically about stuff—as long as step one is acknowledging these guys and what they went through that night.”

It’s not too tough to figure out who he’s talking about here, and it isn’t the likes of Ted Cruz, who used the film as an applause line at the last debate. The Daily Beast did ask him about that as well, and he took a sharply different tone (emphasis mine):

“I don’t care if you’re Ted Cruz, Marco Rubio, or Hillary Clinton herself,” he says. “All of them can safely say that if the movie succeeds in portraying these guys as heroes, then that’s an important thing that we should all acknowledge. Now here comes my political spin on it: even Ted Cruz, for him not to say it acknowledges our heroes but to make it about that night and connecting it to Hillary, you’re allowed to do that, just say how heroic these guys are first. Give them their due. And then say, ‘And now I’m going to talk to you about how it relates to Hillary Clinton.’ But for the most part, that’s not what’s happened.”

So, lefties who critique the film’s incendiary mirror enactments of debunked Benghazi talking points like the “stand down order” that were grafted onto this tale of heroism are disgusting, and right-wingers who conflate the film with the conspiracy theory exactly as those critics say they are just need to add an update. Got it.

But worse than Krasinski’s idiotic slant is his idiotic shock that anyone would politicize an inherently political movie. Gee, who saw that coming? What’s up next, a feel-good romp about Roe v. Wade? “She’s got a tough choice to make…but not if he can help it! John Krasinski and Katherine Heigl star in Fetal Attrction!” (“Ooow! I feel good…)

I like Jim, and I really hate it when people get on celebrities’ cases for saying dumb shit, but Krasinski himself even tells the Daily Beast writer why it is he should probably just shut the entire f*ck up:

“I don’t usually follow this stuff, but for this one, I took it personally for these guys,” he adds. “We all put our names on the line to make sure we did justice to these guys.”