By All Means, Democrats, Make Slavery Reparations Into a Campaign Issue
Opinion

By All Means, Democrats, Make Slavery Reparations Into a Campaign Issue 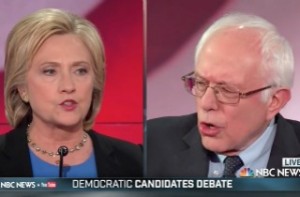 The Hillary Clinton campaign is currently in the middle of a bizarre tango, attacking Bernie Sanders for not supporting slavery reparations while dodging questions about whether she supports them herself. The issue has since spurred countless thinkpieces from left-wing publications and political actors. As the primary season continues, expect the conversation to bleed into the mainstream media, as it did this weekend in an NBC interview of Sanders.

When Clinton and Sanders desperately scramble to win over black voters ahead of the Southern primary states, it’s not unreasonable that Clinton will eventually come down on the side of reparations or that Sanders could reverse himself. But rest assured, every single Republican strategist is salivating at the notion of a Democratic nominee who has given a full-throated endorsement of slavery reparations.

Put simply, slavery reparations have always been deeply unpopular, primarily due to substantial opposition from white Americans. It’s arguably one of the most toxic ideas in all of politics: one 2014 poll found that only 15% of Americans and 6% of white Americans support reparations.

A 2002 CNN poll found 90% of whites opposed the idea and 6% supported it, while the black community is more divided, with 55% in support and 37% opposed. Let that last part sink in, by the way; when asked by pollsters if they wanted the government to literally just hand them a big bag of money, only around half of black Americans agreed. That’s how unpopular the idea is.

Winning over pro-reparations crowd might be great politics during the primary season, where politically active African-Americans are key. But come the general election, you’ve just won over half of a demographic that makes up 12% of the population and votes Democratic 90+% anyway. But you’ve also alienated white Americans, voters who make up a large majority of swing states like New Hampshire, Ohio, Virginia, and Iowa. God only knows where the Hispanics stand on the issue.

Support for reparations would have implications far beyond just the single issue. The notion of slavery reparations encapsulates just about everything independent Americans dislike about liberals. Political correctness, government handouts, redistribution of wealth, pandering to minority voters, throwing money at a problem, apologizing for America’s past… none of these sell well outside of a Democratic primary.

Heck, Americans don’t support the government apologizing for slavery, let alone donating billions of their taxpayer dollars to the cause. If the Democratic nominee supported reparations, it would serve to reinforce every negative stereotype about liberals that conservatives have fed voters for years.

Even if we suppose that the eventual Democratic nominee doesn’t end up supporting reparations… who cares? Mitt Romney didn’t support banning abortion in the case of rape, but that didn’t stop Obama from running ads claiming he did. He also attacked John McCain in 2008 Spanish-language ads for something Rush Limbaugh said.

Fairly or unfairly, if Democrats continue talking about reparations, Republicans will find a way to hang that albatross on their eventual opponent’s neck. Clinton’s attack of Sanders definitely opens up a legitimate line of attack. If Democrats nominate Sanders and he stands firm on the issue, Republican may pass on the issue. But as Sanders desperately tries to win over the Obama coalition in the general, expect to see black staffers or surrogates pulling the same tightrope act that Clinton has down pat now.

Democrats have very, very little to gain by starting a debate over slavery reparations and quite a lot to lose. So by all means, Democrats, let’s make this a campaign issue, but expect voters to bite.