Glenn Beck, In The Library, With A Pipe, Smacks Down Joe Klein (Again)
your moment of glenn

Glenn Beck, In The Library, With A Pipe, Smacks Down Joe Klein (Again) 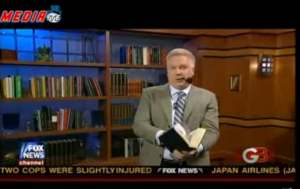 Something about Time’s Joe Klein really brings out the best (or the worst, depending) in Glenn Beck. The last time Beck went after Klein — for penning a column on the “stupidity” of Americans — the result was arguably Beck’s best fifteen minutes ever.

Today’s spot wasn’t quite so fun or entertaining (truth be told, it’s getting a bit old). Another difference this time around is that Beck also name-checked Klein’s fellow Swampland writer Jay Newton-Small, who “is clearly smarter…because she has three names.” Actually, Newton-Small is just plain smart and her Haiti coverage was excellent. Also, I’m pretty sure Beck knows that then-candidate Obama, teleprompter-free during the time in question (part of Beck’s defense of Palin’s hand “notes”) was joking about having been to 57 states, making for a bit of lame punchline I have to say. Nevertheless, between the addition of a pipe and a tweed jacket, and a fake library (more on that below) the result is, admittedly, a little bit like Masterpiece Theater meets Mr. Rogers meets…Mel Brooks? Video below.

Interesting side note. It’s been discussed before, here and elsewhere, the effect Beck’s reading recommendations have on book sales. Yesterday, Beck made mention (not for the first time) of ‘A Patriot’s History of the United States: From Columbus’s Great Discovery to the War on Terror‘ by Larry Schweikart. Today it is number one on both Amazon and Barnes and Noble (during yesterday’s show Steve noted that it was number seven on Amazon and 18 on B&N). From Amazon’s product description (which, in truth, sounds like it could have been written by Glenn Beck) and video of Beck discussing the book below.

For the past three decades, many history professors have allowed their biases to distort the way America’s past is taught. These intellectuals have searched for instances of racism, sexism, and bigotry in our history while downplaying the greatness of America’s patriots and the achievements of “dead white men.”

As a result, more emphasis is placed on Harriet Tubman than on George Washington; more about the internment of Japanese Americans during World War II than about D-Day or Iwo Jima; more on the dangers we faced from Joseph McCarthy than those we faced from Josef Stalin.

A Patriot’s History of the United States corrects those doctrinaire biases. In this groundbreaking book, America’s discovery, founding, and development are reexamined with an appreciation for the elements of public virtue, personal liberty, and private property that make this nation uniquely successful. This book offers a long-overdue acknowledgment of America’s true and proud history.