Joe The Plumber Does Damage Control, With The Help Of Breitbart And Hannity 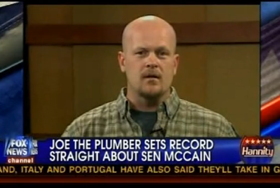 Joe the Plumber, aka Samuel Wurzelbacher, is just a regular guy that tells it like it is. That’s why when the mainstream media takes quotes like “[John McCain] really screwed up my life” and “I don’t owe him s—” out of context, he feels it is his duty to set the record straight. His clarification tour has so far been short, sweet, and just in time for the five congressional primaries he has endorsed a candidate in so far, publishing an opinion piece on Andrew Breitbart‘s Big Government and making a special appearance on last night’s edition of Hannity.

The article— his opening act– is fairly mild-mannered, though he never quite backs down from his words. Calling McCain an “honest-to- goodness, true blue American hero” and evoking the name of the Patron Saint of Conservatism, he explains that he regrets his wording:

“I broke Ronald Reagan’s “11th commandment” not to criticize fellow conservatives in public and the liberal mainstream media has had a field day with it. I regret that. I wish I had said it to his face and privately. I do honestly believe that John McCain’s service to our country as a courageous naval aviator and POW rightfully earned him nothing but respect. He has represented the epitome of honor, duty and unimaginable sacrifice. And for the record, he didn’t ruin my life. He and Barrack [sic] Obama sent me down a far different path than the one I was happily on–a new path that made me famous, notorious, sought after and vilified.”

“I wish I had said it to his face” isn’t exactly an apology, and his final zinger– “to fully answer the reporter who said that John McCain ‘made me’–I was made by my country, my faith and my family”– set the tone for his interview with Sean Hannity later that night, where he was on the offensive. Introduced by the host as “one of the McCain campaign’s deadliest weapons,” he clarified that the media had taken his quotes out of context by calling McCain “the lesser of two evils,” claiming he “doesn’t represent true conservatism,” and confirming that he doesn’t support him “at all.”

But, taking a page out of the Sarah Palin publicity handbook, the real villain in this story isn’t McCain– it’s the mainstream media. McCain didn’t “screw up” his life, he explains, but, rather, the media took away his livelihood. When he met Obama, he “was living the American dream,” but then “the media closed down [his] business for two months.” And, once again, the media takes the fall for spinning his words into their narrative, even though he doesn’t back down from them.

Hannity concludes the interview by getting Wurzelbacher to half-heartedly admit one of the most thinly veiled launches of a political career in recent memory: “You’re Joe the Plumber! Would you consider running [for office]?” Wurzelbacher admits he has considered it, creating a possible scenario that may outdo SNL‘s interpretation of a Palin/Glenn Beck win in 2012.

Watch Joe the Plumber on Hannity below: