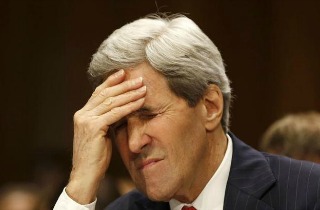 If you were a conspiracy-minded individual, you could be forgiven for thinking former Massachusetts Sen. John Kerry’s ascension to the role of America’s chief diplomat was an elaborate plot to make former Secretary of State Hillary Clinton look better by comparison.

Kerry’s principle approach to the practice of diplomacy over the course of 2014, a year of meteors in which crises abroad have proliferated with stunning alacrity, has been to eschew actual diplomacy in favor of gaffes, bombast, and truculence.

The latest kerfuffle, arising from comments Kerry made behind closed doors in which he said that Israel risks becoming an “apartheid” state unless Jerusalem drops their objection to negotiating a two-state solution with a group the secretary’s own State Department lists as a terrorist organization, is a genuine international incident. The implication in Kerry’s comment is deplorable and utterly baseless. If there is a country in the Middle East where minorities enjoy the type of equal protections they are due, it is Israel.

Fresh off inspiring a round of mockery when she chided Moscow for failing to live up to the “promise of hashtag,” State Department spokeswoman Jennifer Psaki spent the day performing damage control by tweeting out links to Daily Kos and Think Progress posts which highlighted center-left officials in Israel who have issued similar warnings about Israel’s approach to minority rights. The damage control did not seem to shore up Kerry’s position, however, as he later issued statement expressing unequivocal regret for his remarks. When you’ve lost the support of even stalwart ideological allies like Sen. Barbara Boxer (D-CA), all the Daily Kos stories on earth will not help you.

But this is only the latest boneheaded statement Kerry has made which has sapped his authority as America’s diplomat-in-chief. Last week, amid a bout of self-pity, Kerry asserted that America’s diplomatic trials over the course of the Cold War were “easier than it is today.” “Simpler is maybe a way to put it,” he clarified.

After making the odd assertion that the United States is no longer the “sole dominant economic and military power around,” Kerry proclaimed that America’s “choices were less varied, less complicated, more stark, more clear” during those 42-plus years of conflict.

RELATED: ‘If I Could Rewind the Tape…’ Kerry Issues Statement on Apartheid Comment

This is a simply asinine sentiment to hold, let alone to carelessly express. The Cold War, which regularly became a very hot war in battlefields ranging from Greece, to Korea, to Cuba, to Angola, to Grenada, to Vietnam, to Afghanistan, et cetera, et cetera, was anything but a “simpler” time. This supremely arrogant statement undermines the important work done by Kerry’s predecessors; men like John Foster Dulles, Henry Kissinger, Zbigniew Brzezinski, and James Baker. Each of whom can cite unambiguous diplomatic achievements that advanced the interests of the United States, a distinction Kerry cannot yet claim for himself.

Baker and George H. W. Bush, along with their Soviet counterparts, skillfully navigated the most dangerous period in recent history – the rapid collapse of communism in Europe and the resulting hardline coup in the Kremlin – and created a soft landing space for the Soviets which brought the Cold War to a peaceful conclusion. Anyone who would so casually devalue that spectacular achievement lacks the basic temperamental elements professional diplomats should regard as a prerequisite.

Indeed, the only achievements for which Kerry has earned universal plaudits from diplomacy watchers has been his ability to act as the Obama administration’s bad cop in the standoff with Russia over their naked revanchism in Eastern Europe. Kerry has proven himself to be adept at outlining the ways in which Russia has flaunted international norms, and he has pulled no punches when calling out the Russian propaganda Moscow uses to justify its actions. But this is not the hard work of diplomacy. It’s politics as practiced by a lifelong politician.

Conservatives have long pointed to both Clinton’s inability to cite a lasting diplomatic accomplishment from her time in Foggy Bottom as evidence that her thin resume cannot serve as a qualification for higher office. Say what you will about Clinton’s achievements as Secretary of State, at least she did not actively harm America’s diplomatic position.