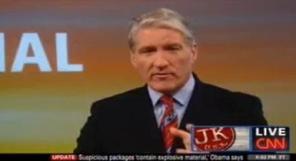 This morning, Page Six published an item entitled “John King’s magical wall sent him over the edge just days before the election.” The story goes that a malfunction involving the “magic wall,” CNN’s giant touch screen, caused King to have an “onset meltdown” which led to a private reprimanding Turner Broadcasting System CEO and chairman Phil Kent. King has released a statement calling the report a “fantasy” – but he was clearly pissed about something that day.

First, here’s how the incident was described in Page Six. From The New York Post:

The DC-based anchor had a meltdown while anchoring his 7 p.m. show, ‘John King USA,’ from CNN’s New York studio just days before the midterm elections.

After a slew of technical and editorial errors, King lost his cool when his signature and somewhat overworked touch screen malfunctioned.

‘I wish I brought a gun to work,’ King yelled at studio operators on Oct. 29, according to several CNN sources.

According to a source, Turner Broadcasting System CEO and chairman Phil Kent called King into his office to reprimand him. ‘Phil has always been a huge fan of King and has always protected him when people were tired of his hothead antics, so this is a blow to him,’ the insider said.”

And here is King’s official statement:

“[Tara] Palmeri’s latest fantasy is again full of fiction. There was no wall malfunction. No reprimand from Phil Kent and no warning from Jim Walton. There was one moment while in NY where I voiced frustration after some problems at the top of the show, but in typical fashion it’s completely distorted in the NY Post.”

We looked over the show in question and there were some major technical problems…but at the beginning of the show, involving a satellite connection with correspondent Mohammed Jamjoom. At the very least, it had nothing to do with the wall (which he used later in the show). Below is the clip of the opening and the magic at the wall, both from CNN: