John Ziegler, Mediaite’s Newest Columnist, on What to Expect from Him 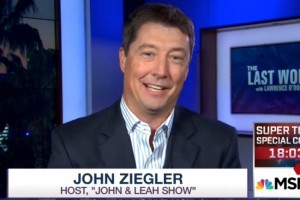 I have written intermittently for Mediaite for several years. However, I will now be doing so on a regular basis as an official columnist here. I figured I should take this chance to explain who I am and what you can expect from me.

Since much of what this website deals with is political in nature, you should know that I am a life-long political junkie who graduated from Georgetown University with a degree in Government (which is a great way to prepare for life if you never want to be assured of holding a steady job). My first political hero was Ronald Reagan and today I am a “conservative” with a “libertarian” bent. I currently host a nationally-syndicated radio show on Sunday nights called “The John & Leah Show.”

As many of you hopefully already know from my columns here during this crazy election cycle, I am not a supporter of Donald Trump. The weird part of that is, by all rights, I really should be. Like Trump, I love golf, hate political correctness, and have utter disdain for the news media. I have actually met him back stage at the Today Show and he later sent me a supportive note for my work on the “Penn State” case, which we both believe the news media has butchered (him based on gut instinct, me on four years of excruciatingly hard work).

I am also an ardent critic of Hillary Clinton. My name is in the credits for the anti-Hillary film which created the infamous (and much misunderstood) “Citizens United” Supreme Court case. My first documentary film, “Blocking the Path to 9/11,” was a decidedly anti-Clinton film.

And yet, while I am still open-minded, I can’t currently support Trump because to me he is simply an unqualified liberal who, in a remotely rational world, can’t win. If someone can convince me that he would, for sure, be better than Hillary (for whom I will never vote) then I will change my mind, but so far no one has come all that close to doing so.

While I love politics (though not nearly as much in a post-Trump world), I will also comment on other matters of public and media interest. On fact, while I am hardly famous, I probably have the most diverse and unusual “semi-notoriety” of anyone of whom I have heard.

With the full understanding that some of these unique aspects of my highly imperfect career might not put me in the most favorable light, here is a partial list of them:

I am a small but significant part of why O.J. Simpson is currently in prison (long story).

I was credited with bringing national attention to John Kerry’s “Stuck in Iraq” comments, which ended any thoughts of a 2008 presidential run (though somehow didn’t cause any problems for him being Secretary of State).

I used to run a website as the world’s biggest Tiger Woods fan and have shown a savant-like ability to correctly predict most of his career swings.
I am the only person to interview Jerry Sandusky on the record after his conviction and probably the only person to ever record an interview (on a “spy pen”) against the rules of the Pennsylvania State Prison System.

I did the first extensive interview with Sarah Palin after the 2008 election and produced the documentary film “Media Malpractice: How Obama Got Elected” based on it. I then became her biggest media defender for about two years before separating myself when it was clear she had sold out to stay famous and get rich.

I was one of the very few conservatives to declared predictively that Mitt Romney, who I liked a lot, would lose in 2012.

While all of this is hopefully at least moderately interesting, the most important thing you need to know about me is how my columns will be discernible from the hundreds of others you see cluttering the Internet on a daily basis. What makes me fundamentally different from the pack is that I truly don’t care about being liked, or about advancing my career. That’s not some sort of edgy branding, it’s the truth.

Most commentators today seem to have the primary goal of making their core audience feel good about whatever is the subject of the day. Many also choose topics and perspectives based on what is most likely to get them invited onto cable news television shows or linked on the Drudge Report. This is not only not my MO, but, if anything, I am far more likely to take a position, assuming it is true, which harms my perceived self-interest (and, gasp, maybe even loses me Twitter followers!) than one which helps get me adoration or attention.

My late mother loved me very much and I have already appeared on nearly every TV show there is, so my sense of self-worth is not dependent on such false affirmations. I also don’t like human beings very much, so their approval means little to me.

Instead, my primary goal is to shine light on truths which few others have the guts to do so. This sometimes means calling out the conservative elites at least as much as the liberals who control most of our media and culture. This is also why I like reading and now writing for Mediaite. It is one of the few places on the Internet where all perspectives can be voiced and where the goal of the outlet is not just simply preach to a previously and strategically selected demographic choir.

The primary premise on which my writing here will be based is that the news media in this country is fundamentally and catastrophically broken in nearly every way. As a conservative, I used to think that reality mostly reared its ugly head in the form of abject liberal bias. While that obviously still exists and must be combated, after having traveled to the epicenter of numerous news hurricanes, I now strongly believe that the media is routinely blowing important stories, often 180 degrees in the wrong direction.

I want to make clear that I am NOT a conspiracy theorist. In fact, I am the exact opposite. The news media is broken because modern fragmentation has radically altered the business model which, in turn, has caused overworked and underqualified reporters to rush to finish stories where the goal is no longer truth, but popularity. When storylines and narratives are chosen directly because of their popularity among a largely ignorant public with increasingly short attention spans, then the truth (which is quite often very unpopular) simply has no chance. Sadly, this is the media world in which we are currently living.

With that in mind, the goal of my work here will be providing the truth as I know it to be rather than creating popularity for myself. Based on my track record, I am confident that you will get plenty of the former and that I will receive very little of the latter. I am perfectly fine with that, and hopefully you will be as well.

John Ziegler is a nationally-syndicated radio talk show host and documentary filmmaker. You can follow him on Twitter at @ZigManFreud