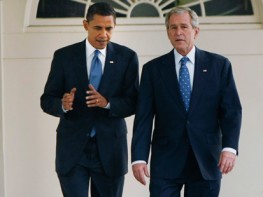 Newsweek‘s Jonathan Alter has been making the media rounds lately to promote his new book The Promise about President Obama. Alter was a guest on WNYC’s Brian Lehrer show today for a segment titled ‘President in Crisis’ — though, at this point, there’s an argument to be made that if the president wasn’t the media might grind to a halt.

The conversation ostensibly boiled down to this: how much of the blame for the current state of the nation, particularly the BP oil spill, should Obama be shouldering? Answer: does it matter? He is the president and the nation is under his watch. Alter points out that a president doesn’t get to choose his battles. Alter also sums up Obama’s presidency thus far, and perhaps in totality, at least for his first term:

Obama’s historic mission, unfortunately for him, has been to clean up Bush’s messes….Literally. So this [the BP spil] is the perfect metaphor for Obama’s presidency….That’s what Obama has had to do on Wall St., on the auto bailouts, on the bank bailouts, on Afghanistan, which turned out to be a much bigger mess than anybody anticipated and now on this. Part of his reaction has been to say privately ‘I haven’t been blaming Bush enough.’ You know, Reagan blamed Jimmy Carter for years, Roosevelt blamed Herbert Hoover for years.

Alter goes on to note Obama doesn’t focus on it because among other things, he doesn’t think it’s classy (even though behind closed doors he is super pissed about it). Here’s the thing. One of the major reasons Obama was elected, if I recollect correctly, was to do just this. Clean up the mess. In fact, isn’t that what every president is elected to do? The question, or the problem here depending, is that the mess Obama took on was inordinately big, and it’s fallen to him to convince people he is up to the job. The second problem, at least at the moment, seems to be that a lot of people are more interested in whether he appears to be fixing it than whether he really is. Listen below.