Josh Earnest Responds to KY Clerk’s Jailing: ‘No Public Official Is Above the Rule of Law’

Josh Earnest Responds to KY Clerk’s Jailing: ‘No Public Official Is Above the Rule of Law’ 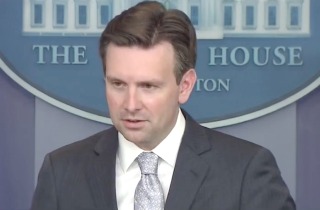 As Kim Davis was taken into custody for her continuous defiance of the Supreme Court’s decision on gay marriage, Josh Earnest was asked to give his thoughts during today’s press briefing. Earnest said that he hasn’t talked about it with President Obama on the subject yet, but said that public officials on all levels are legally required to abide by the ruling of Obergefell V. Hodges.

“On principle, the success of our democracy depends on the rule of law. And there is no public official that is above the rule of law,” Earnest said. “That’s a principle that is enshrined in our Constitution and in our democracy and it’s one that obviously the courts are seeking to uphold.”

Davis has become a recognized figure of controversy ever since she ordered her office in July to refuse marriage licenses––to straight and gay couples––due to her religious beliefs. Davis lost both her federal appeal and her injunction request to the Supreme Court, but when she still wouldn’t give out marriage licenses, her office was ordered to a hearing where she was taken to jail on contempt of court charges.

The Washington Times reported that Earnest was also asked for his thoughts on Davis being jailed, rather than being fined by the judge presiding over the case. To this, Earnest said that the judge was the most appropriate person to determine how to best enforce the ruling on the case against her.