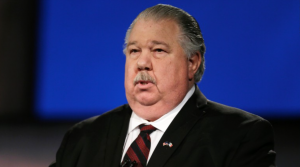 In the weeks following the Trump DOJ’s decision to distinguish permit discrimination against LGBT people, CNN has unearthed a history of shocking claims uttered by the most recent Trump appointee, Sam Clovis, who is slated to become chief scientist for the Department of Agriculture.

As a talk radio host between 2012 and 2014 Clovis has not only called homosexuality a choice, but likened it to pedophilia. The words are striking in that Clovis seems to unabashedly believe that loving someone of the same gender is inherently perverted; as a friendly reminder for those who may be confused, the year is 2017, not 1817.

Clovis routinely refers to homosexuality as “the LGBT choice,” and has spoken against protections against discrimination for LGBT people, stating that these protections for “alternative lifestyles” send the message that pastors aren’t allowed to preach against the “aberration” of the LGBT lifestyle, which is purportedly against church doctrine.

Clovis has also claimed in an op-ed that the argument that people can be born gay and have no control over who they are attracted to and deserve equal rights is invalid, since people born left-handed don’t receive additional protections. In either case, the focus of his career as a conservative in politics has been that anti-discrimination laws for the LGBT community are unconstitutional.

In either case, relevant to his new gig as chief scientist, Clovis, who has called President Obama a “socialist,” has identified climate change as “junk science” — an extreme view to have even for a conservative. At this stage, after all these years, many Republicans can acknowledge the climate is changing, and just aren’t willing to do anything about it. Also relevant: Clovis doesn’t appear to hold any degree in the sciences.

This long track record of bigotry and ignorance would have been disqualifying to nearly any other boss, but as it’s proven time and again, Trump is not like any other boss. And in particular, he’s a boss with a record of justifying anti-LGBT discrimination and sabotaging the environment.