Julian Assange Tells Time: ‘Whose Responsibility Is It To Keep Certain Things Secret?’ 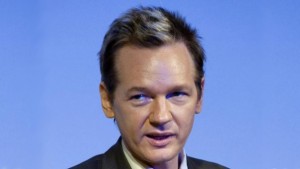 A day before the International Man of Mystery known as Julian Assange landed on Interpol’s most-wanted list, the highly sought WikiLeaks founder treated Time‘s Rick Stengel to an interview conducted over Skype. The two discussed a number of the controversies surrounding his group’s releases, from Hillary Clinton‘s job security, the responsibility of governments to be more transparent, and whether his organization puts actual troops at risk—an allegation he says is “nonsense.”

Stengel started off by asking the WikiLeaker what he imagines his organization’s role is. Assange stuck to his party line, claiming that if he didn’t bring these matters to light, nobody would’ve.

Of course, many have argued that Assange’s brand of advocacy goes too far, and that it ultimately works against his goal for more open diplomacy. However, he gave an instance of how WikiLeaks might’ve helped, not hindered, international affairs:

I just noticed today Iran has agreed to nuclear talks. Maybe that’s coincidence or maybe it’s coming out of this process, but it’s certainly not being canceled by this process.

One of the sharpest criticisms lobbed at WikiLeaks is the danger it poses to American troops, as well as those of our allies. But Assange thinks that’s all hogwash:

Well, this sort of nonsense about lives being put in jeopardy is trotted out every time a big military or intelligence organization is exposed by the press. … However, this organization in its four years of publishing history — we don’t need to speculate, it has a history — has never caused an individual, as far as we can determine or as far anyone else can determine, to come to any sort of physical harm or to be wrongly imprisoned and so on.

Perhaps not physical harm, but what about professional? When asked about the prospect the Secretary of State losing her job, Assange’s response was cold.

I don’t think it would make much of a difference either way. But she should resign if it can be shown that she was responsible for ordering U.S. diplomatic figures to engage in espionage in the United Nations, in violation of the international covenants to which the U.S. has signed up. Yes, she should resign over that.

The two went on to discuss a range of topics before running out of time (being on the run isn’t easy!). But the fact that international authorities can’t even get a fix on Assange makes Time‘s Skype session with him all the more intriguing. You can check it out in its entirety over here.