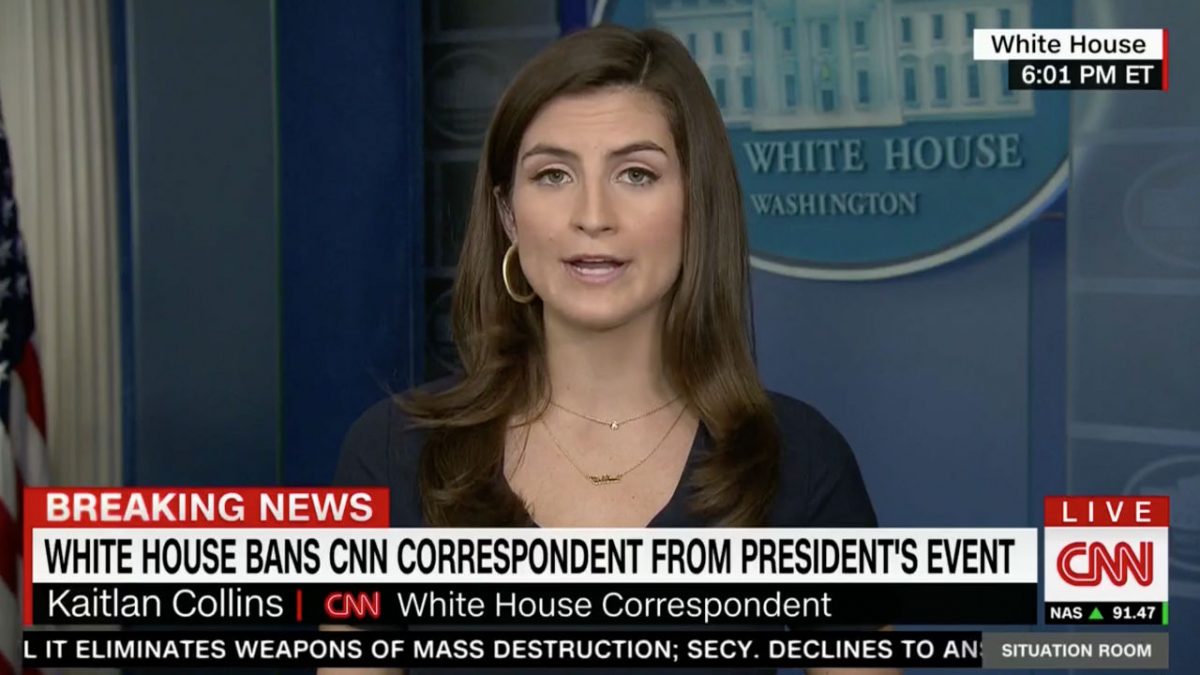 During the brief pool spray this afternoon, Collins shouted out questions to Trump about Michael Cohen and Vladimir Putin. Many reporters try asking questions during pool sprays, but for some reason the White House decided Collins was out of line.

Many of Collins’ CNN colleagues came to her defense:

So let me get this straight? A reporter asked questions? And did it out loud? To a public official?

Siren – my kick ass colleague @kaitlancollins was banned from an open press event for asking legit questions of the president on behalf of the 5 network pool. As a former White House reporter and as an American – this is outrageous and highly alarming.

Absolutely disgraceful behavior from @presssec and Shine. @kaitlancollins is a tough professional and had every right to ask about Cohen, about whom POTUS has repeatedly tweeted. WH press corps and media writ large needs to unite against this. https://t.co/ryg3Uj8qvG

The White House barred one of our reporters from an event today because they didn’t like the totally normal questions she asked earlier. What will the the other networks do? And why is the WH doing this? https://t.co/jBkX4LQxTI

When Collins was on CNN earlier, Wolf Blitzer also expressed his shock at this move.

And many others in the press followed suit:

The television pooler — representing reporters from all five of the major US TV networks — has the duty of asking questions on behalf of ALL of us in broadcast journalism. Every network benefits from his/her effort. https://t.co/xqpeVLobG3

We compete against CNN and we want to win by having the best reporting.

But not like this. It is dead wrong what the White House did to CNN by excluding them from an event because they didn't like questions on topics the President HIMSELF is tweeting about: https://t.co/FchVHTkkU7

"ok gang how do we distract from the awkward questions that we didn't like in that oval pool spray?"

"um, ban the reporter who asked them from the next event?"

"but wouldn't that basically guarantee those questions get replayed ad nauseam?"

This is absurd and UNACCEPTABLE. https://t.co/YJIVavA7K5

If the White House banned a fellow reporter from an open-press event because of her shouted questions, let's be clear: it is inexcusable, unacceptable, and sets an extremely dangerous precedent.

We shout questions at the president regularly. It's called: doing our job. https://t.co/rrZiiLMjkg

This is comic-book-villain level ridiculous by the White House. Do they think they can tell a reporter they’re banning her because she asks questions they don’t like and the whole world won’t find out? Sheesh. https://t.co/y6a4xozHyn

As a member of the White House Press pool- @FoxNews stands firmly with @CNN on this issue and the issue of access https://t.co/TFwfLQtP9h