Kathleen Sebelius Corrects The Record On Obamacare And Sharknado Injuries

Kathleen Sebelius Corrects The Record On Obamacare And Sharknado Injuries 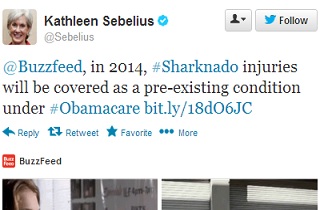 It may or may not have been a ratings disappointment, but SyFy’s epic disaster movie mashup Sharknado has become a genuine pop culture phenomenon. If you were on Twitter at all last night, you probably feel as though you already watched the film, which apparently featured a tornado that flung sharks everywhere. Even if you weren’t, the film’s buzz has now graduated, from microblogging wags and bored Trekkies, to the highest reaches of the federal government. When Buzzfeed created a list of 9 Harsh Political Realities of Sharknado, Health and Human Services Secretary Kathleen Sebelius was quick to clarify.

As Sharknado buzzkill Allahpundit points out, it looks like Twitter’s Sharknado madness might not have translated into ratings for the SyFy disaster flick spoof, as preliminary ratings show the film under-performing the network’s other schlockfests.

All is not lost, though. In Buzzfeed’s list of sad Sharknado facts, they included, at number six, “There is no Obamacare coverage for pre-existing Sharknado injuries.”

In response, Secretary of Health and Human Services Kathleen Sebelius tweeted a clarification:

@Buzzfeed, in 2014, #Sharknado injuries will be covered as a pre-existing condition under #Obamacare

As cool as it is that a cabinet official is this plugged-in to the dorkiest, cheesiest sci-fi impulses of the electorate, Secretary Sebelius is only half-right, or rather, is only telling half of the story:

That’s right, Buzzfeed, Obamacare actually already covers preexisting Sharknado injuries, as long as they’re incurred by children. We await the correction. We also await the George Will column about Obamacare’s perverse incentive to use children as human Sharknado shields.