Katie Couric: Maybe We Need A Muslim Version Of The Cosby Show 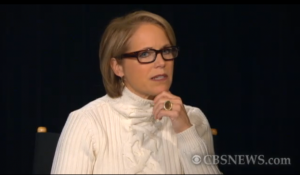 As 2010 comes to a close, the media industry is taking its annual breather to reflect upon all the things it had to cover in the past year. Katie Couric, in her CBSNews.com review of 2010, highlighted the controversy surrounding the Park51 project. “The bigotry expressed against Muslims in this country has been one of the most disturbing stories to surface,” she told her panel. In that media narrative, she saw “a seething hatred many people feel for all Muslims,” which she theorized could be remedied by another, more lighthearted narrative: “Maybe we need a Muslim version of The Cosby Show.”

She came to the situationally comedic solution after offering this take on American Islamophobia:

I also think sort of the chasm between, or, the bigotry expressed against Muslims in this country has been one of the most disturbing stories to surface this year. Of course, a lot of noise was made about the Islamic Center, mosque, down near the World Trade Center, but I think there wasn’t enough sort of careful analysis and evaluation of where this bigotry toward 1.5 billion Muslims worldwide, and how this seething hatred many people feel for all Muslims, which I think is so misdirected, and so wrong—and so disappointing.

So could funny Muslims in even funnier sweaters be the answer? “I know that sounds crazy,” she said, “But The Cosby Show did so much to change attitudes about African-Americans in this country, and I think sometimes people are afraid of what they don’t understand—like you, Mo.” She was referring to Daily Show veteran and NPR regular Mo Rocca, who was present for the discussion. A Harvard alumnus, Rocca shamefully confessed that despite having attended “really fancy schools,” he knows basically “nothing about Islam.”

The two then “totally agree[d]” that “religion should be taught as an academic subject in public schools.” A funny solution, given that Rocca had just admitted-slash-joked that even his expensive private schooling had been insufficient.

But not as funny as a Muslim Cosby Show! Of course, there would be one catch: we’d need a Muslim Bill Cosby. Do we have one, America? I don’t know, but one thing is for sure: Aziz Ansari would make a great Theo Huxtable.

Watch Couric pitch America’s next hit sitcom in the @katiecouric clip below.