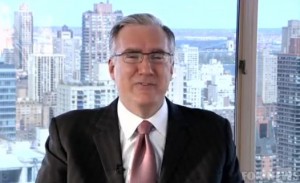 Those looking forward to Keith Olbermann‘s installation of a new rear entrance for Wonkette in his Worst Persons segment might be a little disappointed in the web impresario’s denunciation of Jack Stuef‘s Trig Palin story, but the segment is somewhat redeemed by Olbermann’s clever (so clever he hyped it in two separate tweets!) “special greeting” for Trump: “FOK off!”

Olbermann deserves credit for denouncing Wonkette early on Twitter, and to some degree, for devoting a third of his “Worsts” segment to denouncing the site, but this only gets a silver? And gets beat out by Trump v Seinfeld? How is Trump’s nasty letter to Jerry Seinfeld worse than attacking a three year-old child?

But then, he shifts his criticism to the “legitimate question” of whether Palin uses Trig as a prop, and essentially slams Stuef for giving Palin one more thing to bitch about. Even if you buy this premise (I don’t), couldn’t Olbermann’s attack have launched without this extra payload? The guy crapped all over her baby, can you give it a rest for five seconds?

Olbermann finishes the segment amusingly enough, however, with a characteristically articulate takedown of Donald Trump’s feudlet with Jerry Seinfeld, and concludes by hanging a supernova-bright lantern on his sign-off joke.

“Keeping in mind that this is the FOK News Channel website,” he begins, “F-O-K, Friends Of Keith,…Don,” oh boy, here it comes! “FOK off!”

Keith, it’s the internet on line two. They want me to tell you you’re allowed to say “fuck” here.