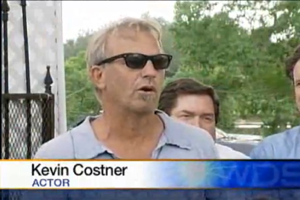 This story has all the makings of an SNL sketch, but may actually be the best news BP has gotten in the Gulf of Mexico since an oil rig exploded there, leaving a gushing oil well open, almost a month ago. Academy Award-winning actor Kevin Costner and his brother, Dan, have been developing oil separation machines designed to respond to massive oil spills for 15 years. Thanks to BP, they’ll finally have the opportunity to test their technology.

The New York Times is reporting that BP has approved six of the machines from Costner’s company, Ocean Therapy, for testing in the Gulf. The machines work like a centrifuge, using the oil’s larger density to separate it from the water. The water that comes out of the machine is 99% purified. Costner and his team have been working on the machines since the 1989 Exxon Valdez disaster, just in case:

“Kevin saw the Exxon Valdez spill, and as a fisherman and an environmentalist, it just stuck in his craw, the fact that we didn’t have separation technology,” said John Houghtaling, Mr. Costner’s lawyer and business partner as chief executive with Ocean Therapy Solutions, which developed the technology.

Mr. Costner’s brother, Dan, is a scientist who worked on the project and was also in New Orleans this week.

On Wednesday, BP’s chief operating officer, Doug Suttles, said that the company had approved six of Ocean Therapy’s 32 machines for testing. All boast centrifuge processing technology — giant vacuum-like machines that suck oil from water, separate the oil, store it in a tanker and send the water, 99.9 percent purified, back into the gulf.

Below is a report, courtesy NYT, showing how the machines work– they’re pretty neat! And if it works, not only would it be one of the most solid celebrity contributions to science in history, it would also make the oil spill disaster, if not fixable, at least slightly more manageable than before.