Kindle to Dwindle with Release of Apple Tablet?

Kindle to Dwindle with Release of Apple Tablet? 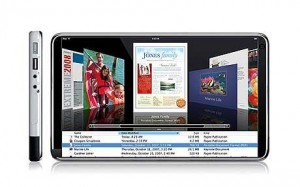 Pretty much everyone – from Politics Daily to BusinessWeek to the LA Times to textbook companies and every techie publication known to man – is anticipating the release of a Kindle-esque Apple tablet, or at least an announcement of it. Perhaps Steve Jobs spoke too soon last year when he told the New York Times that the Kindle would inevitably fail because Americans just don’t read anymore.

Jobs is apparently feeling less skeptical nowadays, when insiders are receiving tip after tip of the tablet’s expected release in early 2010.

BusinessWeek reported last year that an Apple tablet was “unlikely to be a Kindle killer” for many reasons. Besides the technical reasons that we won’t get into here (LCD vs. E-ink doesn’t sound like much of a thrilling discussion), BusinessWeek has faith in the Kindle’s continued success because of Amazon’s “vast lead in its understanding of the book business.” Books are their niche, and it’ll be hard for Apple to mimic Amazon’s dominance on the digital e-book format. Jobs’ opinion about the demise of books is no real help to Apple either.

On the contrary, the geeks at Wired predict with their headline that “Large-Screen Kindle Won’t Mean Squat if Apple Tablet Arrives”. Despite Jobs’ earlier rejection of the Kindle concept, we also have a hard time foreseeing the awesomeness of Apple failing at any venture they take on.

Naturally, Apple has declined to comment on the rumors, but Slash Gear tells us that Apple is working on two tablets: one six inch, and one larger touchscreen. The textbook company Barron’s is anxious for what they project will be a November release date. And they have much to anticipate: Amazon has already worked out deals with many textbook publishers, and several universities are picking up on replacing heavy, paper-rich textbooks with large screen Kindles. Large screen Kindles could be a “knight in shining digital armor” for the struggling newspaper and magazine industries trying to escape the slump of recession. The momentum this paper-shedding movement will gain from a brand like Apple could mean revolutionary things for media, publishing, the way we read and our daily lives.

Amazon sold half a million Kindles last year, but a multi-purpose tablet from Apple would make awkwardly reading a book from a digital tablet mainstream, and maybe even hip. BusinessWeek insists that criticism of the Kindle as a single-purpose device “misunderstands the passionate readers who are the heart of the Kindle market.” But what Stephen Wildstrom fails to understand is that an Apple tablet would mean an entirely new market of people who aren’t just using the thing to read, but to browse the web and use thousands of applications.

Whether Apple will actually release such a product isn’t known for sure, but perhaps Steve Jobs should bite his tongue for now.