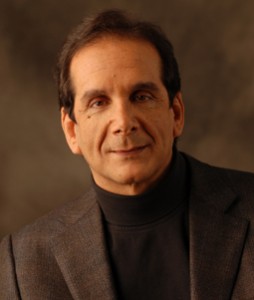 Lately, the media has been eating up the doom and gloom projections for Democrats in the November 2010 election, so much so that you kind of have to wonder to what degree it might be a self-fulfilling prophecy. Ironically, however, conservative Charles Krauthammer predicts a not-so-gloomy future for Obama and the Democratic Party, regardless (and maybe even because of) what will likely happen in November.

The most interesting part of Krauthammer’s column in the Washington Post is the extent to which he portrays Pres. Barack Obama as a force to be reckoned with. Krauthammer clearly doesn’t agree with what Obama has spent his first year and a half in office doing, but he acknowledges the historic nature of Obama’s presidency and warns Republicans, in no uncertain terms, “Don’t underestimate Barack Obama.”

Krauthammer compares Obama’s presidency to Reagan’s, noting that “both presidencies were highly ideological, grandly ambitious and often underappreciated by their own side.” And while Obama has come under fire from critics on both sides of political spectrum, Krauthammer argues that these critics are actually missing the big picture.

Obama’s transformational agenda is a play in two acts.

Act One is over. The stimulus, Obamacare, financial reform have exhausted his first-term mandate. It will bear no more heavy lifting. And the Democrats will pay the price for ideological overreaching by losing one or both houses, whether de facto or de jure. The rest of the first term will be spent consolidating these gains (writing the regulations, for example) and preparing for Act Two.

For Obama to fulfill the remainder of his agenda, he’ll need to win a second term. And here’s the kicker. As Krauthammer sees it, letting the Republicans win control of either or both houses this November might actually benefit Obama (and Democrats) in the following 2012 election.

If Democrats lose control of one or both houses, Obama will probably have an easier time in 2012, just as Bill Clinton used Newt Gingrich and the Republicans as the foil for his 1996 reelection campaign.

Over the past few months, news and political analysis has been remarkably focused on the short term, concerned mostly with how this or that event will play out in the November elections. There has been comparatively less attention given to what could happen if the supposed inevitable Republican resurgence comes to pass, let alone what that could mean for future elections. Krauthammer’s foresight, then, is what makes this column particularly interesting.

It also, incidentally, makes Sarah Palin‘s Twitter endorsement of Krauthammer’s column ever so slightly amusing. The shared Tea Party and Republican rallying cry that November is a “referendum on Obama” is, after all, a rather short sighted game plan.