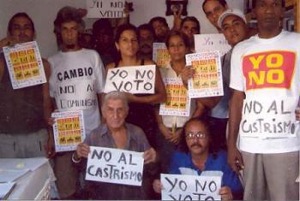 Earlier this week, Raul Castro agreed to release 52 Cuban political prisoners. The release came after bilateral talks with Spain and was prompted in large part by activist Guillermo Fariñas‘ 130-day hunger strike, who, upon hearing the news, thanked the people of Spain and called off the hunger strike. Naturally, the largest anti-Castro Cuban American blog on the web would be fuming about this outrageous development.

For the uninitiated, Babalú Blog is the busiest hub of Cuban-American political activity on the internet. It boasts an average of 21.5 thousand visitors a month, according to Quantcast— a hefty number for a niche ethnic blog– and regularly becomes part of the national discourse through regular links from people like Michelle Malkin and sites like Newsbusters, Big Journalism, and myriad other American sites. In many ways, it is the voice of the Cuban-American community in the blogosphere and, and such, in the mainstream media.

Keeping that in mind, this is blogger Alberto De La Cruz’s take on the freed prisoners, complete with graphic pictures from the 1897 Spanish massacre of Cuban peasants:

“Spain says they are only trying to help the Cuban people by scheming behind closed doors with a murderous regime and the compromised and immoral leadership of the Catholic church in Cuba.

They expect us to thank them for negotiating the banishment from Cuba of 52 of some of the bravest dissident voices on the island.

Perhaps Spain believes we should also thank them for Spanish General Valeriano Weyler’s selfless efforts in protecting noncombatant Cuban peasants. In 1897 and 1898, the General forced Cubans into concentration camps to “protect” them from the rebels.”

Holy non sequitur, Batman! It should be obvious why this completely irrelevant colonial atrocity has no place in the discussion of modern Cuban-Iberian relations, so attacking that point isn’t worth the effort. It isn’t really worth attacking De La Cruz for needlessly making his audience suffer through those pictures, either.

The truly heinous argument made here revolves around the premise that Cuban-Americans should oppose the unprecedented release of so many prisoners of conscience— an event that satisfied Fariñas into ending a 134-day hunger strike to much fanfare. According to De La Cruz, these prisoners weren’t liberated from the indescribable, hellish non-life the Castro regime condemned them to for simply speaking their mind— they were “banished” by the “scheming” of their former colonizers that once again stuck its nose where no one called it to.

Instead of thanking Spain, De La Cruz argues, Cuban-Americans should side with the Castros and hold on to centuries-old grudges. Instead of rejoicing that so many of our island’s bravest are getting a second chance at life, we should be condemning their “banishment” from prison. Instead of proclaiming victory and slowly trying to regain the ability to eat, Guillermo Fariñas should condemn Spain for something that happened in 1897 and die of starvation.

If De La Cruz’s bewilderingly off-base post sounds like a statement from the political fringe, that’s probably because it is, in theory. But in practice, because it is a statement made on an ethnic blog– the #1 ethnic blog for its respective ethnic group– it might as well be a press release on behalf of the Cuban exile community. It sends a very clear statement that Cuban Americans do not want political prisoners to be released from jail. They support the efforts of the Castro regime to keep them behind bars, because delivering these prisoners to freedom would be ‘banishment’ from the island.

This is simply not a widely-held belief in the Cuban exile community, not least because many who live in Miami, California, and the greater New York area were once political prisoners themselves. As a member of that community, and one who is also a member of the media, I’d like to make state for the record that I am thrilled to see so many– yes, only a fraction of the thousands on the island, but still many– prisoners of conscience find their way to freedom, and absolutely ecstatic over Fariñas decision to end the strike and try to live again. And I’ve yet to hear of a Cuban-American who feels otherwise, De La Cruz excepted.