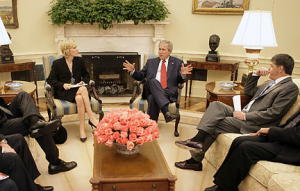 On Wednesday, Laura Ingraham‘s newsletter, the “Daily Fix,” criticized the President Obama‘s meeting with MSNBC hosts (among other members of the “progressive media”) — remarking that had Fox News hosts met with President Bush. Incidentally, the staffer who wrote the newsletter was unaware that Ingraham herself was among the group of conservative personalities who visited the Bush White House in 2006.

“Can anyone even imagine how the press would have reacted if Fox News hosts and conservative personalities had stopped by the Bush White House to discuss policy?,” the newsletter reads. “They would have been rightly outraged. Given MSNBC’s history of blatantly promoting the DNC’s talking points and spewing left-wing talking points, maybe it’s time they just become Obama’s official mouthpiece.”

Liberal watchdog Media Matters for America noted a New York Times story from 2006, which reported on “an influential group of conservative radio hosts” meeting with Bush at the White House. That group included Ingraham and Fox News’ Sean Hannity, and was reportedly “part of an intensive Republican Party campaign to reclaim and re-energize a crucial army of supporters that is not as likely to walk in lockstep with the White House as it has in the past.”

The White House and the Republican National Committee are hammering home that point in interviews, talking-point bulletins and a healthy dollop of pomp that only a White House can provide.

The effort will peak on Oct. 24, when the administration will hold something of a talk-radio summit meeting, inviting dozens of hosts to set up booths on the White House grounds, where top cabinet officials are expected to sit for interviews.
[…]
But, several hosts said, the most telling development so far this year was the White House decision to invite some of the most popular hosts to the Oval Office for off-the-record time with the president.

The staffer who wrote the newsletter responded to Media Matters:

“During Laura’s brief radio hiatus, the Daily Fix is written by staff. Although I didn’t know Laura had visited the Bush White House with other conservative radio hosts, the circumstances of her meeting the president were quite different. Laura did not go to the White House to advise the president, but was simply briefed on policy for perhaps an hour. More importantly, it wasn’t in the middle of a critical period when the President should be meeting with members of Congress to discuss resolving something as important as the fiscal cliff. The gist of the Daily Fix was that President Obama was neglecting crucial negotiations to meet with liberal members of the media, and that point still stands.”

The 2006 meeting, according to the Times, lasted an hour-and-a-half and included discussion of Bush’s case for the war in Iraq as well as his immigration proposals.