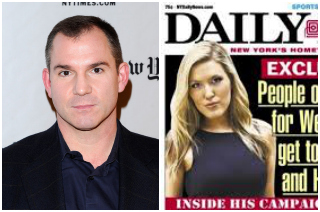 “One young staffer on Anthony Weiner’s mayoral campaign saw a chance at bright lights and went after it, spilling secrets in return for a glamour shot on the front page of a major newspaper, determining that attention was worth whatever crassness it called for,” Bruni wrote, going on to connect Weiner’s sycophantic assimilation with the Clintons to the intern’s supposed tell-all antics. “The apple, we know, doesn’t fall far from the tree. Maybe the interns don’t fall far from the candidate, either.”

One problem: “None of that is true,” responded Sarah Lacy, a tech journalist and founder of PandoDaily:

“Before writing the piece, Bruni seems not to have done so much as a cursory Google search on Nuzzi. If he did, he might have found that she hasn’t actually done a single interview or TV appearance since Anthony Weiner’s communications director called her a ‘slut bag’ and ‘bitch’ and far worse. That her only statement on the matter was accepting Barbara Morgan’s apology. That she’s kept her head down and continued to work on other pieces while this drama has swirled around her…

“Or he might have learned that when Piers Morgan’s producer made lewd comments about her ‘body’ she hung up on her and decided right then and there not to do any TV, lest she become the story. Lest she be a fame whore.”

Paul Carr, Nuzzi’s editor at NSFWCORP, agreed, explaining that Nuzzi had written articles about her time on Weiner’s staff at his request, and that when the Daily News published her follow-up, it was on the agreement that they not splash her picture across the front page, which they promptly did:

“But accuracy doesn’t matter to slugs like Bruni: he doesn’t need Google to understand what motivates girls like her. Sure the real Olivia hasn’t given a single interview, but girls like her are surely desperate for a seat on the Good Morning America couch (she turned them down) or a Fox News bar stool (the interview request from Hannity’s producer went unanswered). Girls like her are probably shopping a book deal. Am I right, fellas?”

“Using Bruni’s logic,” Carr added, knowing one thing about Bruni is “information enough for me to guess at his motivations, impugn his reputation, snipe at his gender and—really—call him whatever names I choose. For example: Frank Bruni is a lazy, misogynistic sack of dicks—and everything that’s wrong with sadsack male opinion columnists in America.”

The column was also roundly beat up on Twitter:

Carr finished by wondering if Bruni’s real problem were young journalists nipping at his heels. “Can there be anything scarier to lazy hacks like Bruni than a smart, ambitious millennial, clambering up the career ladder behind them?” he asked. “Well tough shit, Bruni. Olivia Nuzzi is coming for your job.”