‘Learn How to Behave’: Anderson Cooper Shuts Down Selfie-Seeker

Anderson Cooper is live in Canada tonight reporting on the horrific shooting outside Parliament earlier today. Vandon Gene, a contributor for Sun News, crossed paths with Cooper tonight in the middle of his report and asked him for a photo.

Cooper didn’t give Gene the reaction he felt he deserved, instead chewing him out and saying, “No, I will not take a photo with you on a day where someone was killed! It seems wildly inappropriate!”

Gene uploaded video of the encounter to YouTube, but was quick to take it down. Watch that below:

He then took to Twitter to rant at Cooper for being rude (all his tweets have since been taken down): 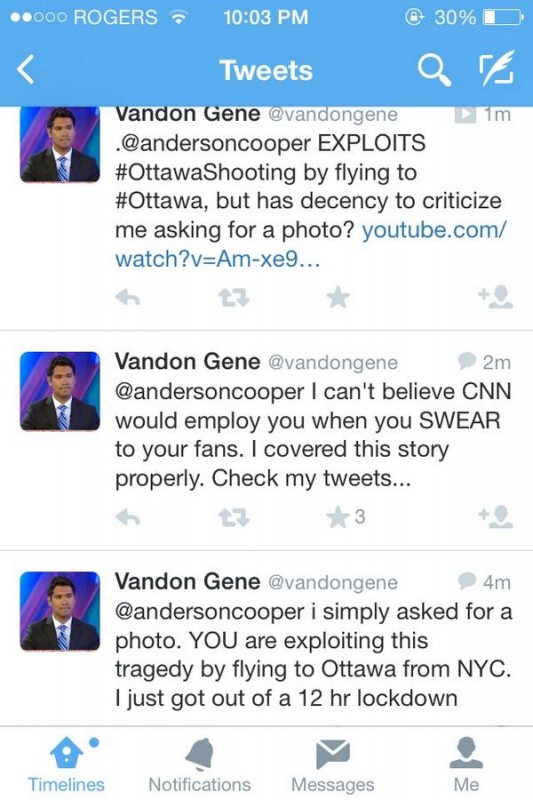 And remarkably, Cooper fired back:

.@vandongene dude, you were rude and asking for a selfie near where a soldier was killed. It was completely inappropriate. Think about it

.@vandongene I can't believe any station employs you, and if you want to be a journalist, learn how to behave when covering a story

Cooper has yet to tweet again, but Gene didn’t exactly let it go. Here are what the other tweets said, before he wisely decided to delete them:

Hey @andersoncooper, while you were on a plane flying here, I was on the streets covering #OttawaShooting… #Ottawa pic.twitter.com/eBuvpUjgmZ

NOTE: I didn't ask for a "selfie", I asked for a photo.@andersoncooper Swore at me, then ranted. I was in lockdown, you came here to exploit

Sorry @andersoncooper, but you have no right to be so rude. I was actually affected by #OttawaShooting.YOU came here to exploit it… #AC360

so @andersoncooper, you take a "selfie" with someone else, but wouldn't take a photo w/ me? https://t.co/YuMyhbUZ5B pic.twitter.com/Ro8Z4p2H0f

Gene has hosted a show on the Tea Party News Network. His website describes him as a believer of “fair and balanced journalism” and someone who “asks the tough questions, digs deeper into the story, and follows it through to the end to get his viewers the answers.” Gene is also currently attending college in Ottawa.

Again, I unreservedly apologize for my actions yesterday. It was completely inappropriate, disrespectful, and distasteful. @andersoncooper