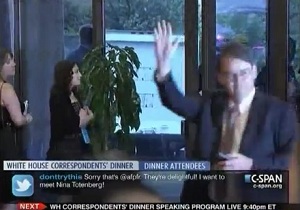 It’s that time of year again, when critics of the White House press corps write one of the two articles they write every year (the other being “Do we even need a White house Press Corps?“). In the springtime, like cliché crocuses, the predictable criticisms of the annual White House Correspondents’ Dinner arise: that the spectacle is turning us into the bacon-eating pigs in Animal Farm, seduced away from the regular people we’re supposed to serve, or that the ever-increasing wattage of the celebrities who attend are sapping us of our essential gravitas fluids, or that our 3,000-person event makes us “too cozy” with the guest of honor.

These criticisms invariably come from people who either don’t work the beat, have already had their fun, or have never had any fun, and rarely do the people who attend get asked what they think. This year, broadcasting legend Tom Brokaw has renewed his annual objection to the event, and found hearty agreement from our own Noah Rothman, who thinks our big little dinner is “Hurting The Media’s Already Tarnished Brand.”

Now, chronicling the tarnishing of the media’s brand is kind of what we do around here, but if you search through the annals of Mediaite for completely blown stories, you’ll be hard-pressed to find any that emanate from the denizens of the Brady Briefing Room. The White House press corps is by no means perfect, but we’re not out there misreporting the statuses of manhunts, or the results of Supreme Court decisions, or praising conspiracy-theory whackos, or being conspiracy-theory whackos. We can argue about the fine points of White House reporting, but it seems illogical to suggest that the White House Correspondents’ Dinner is the tipping point that outweighs all of what the rest of the media does the other 364 days of the year.

Even that calculation requires you to accept the premise that the dinner carries any negative impact, beyond offending the sensibilities of Tom Brokaw. I’d like to note that I have nothing but the utmost respect and affection for Tom Brokaw. It was one of the top ten thrills of my life to meet Mr. Brokaw at the White House, and to have him recognize me (even if it was only because I live-tweeted my heart attack). His sensibilities are very important to me, but everyone always thinks baseball was better when they were a kid, and Mr. Brokaw’s frame of reference as a White House reporter dates back to the mid-seventies.

Furthermore, when he imagines John or Jane Q. America being put off by White House reporters rubbing elbows with rich celebrities once a year, he’s doing that as a rich celebrity. Nobody ever thinks to ask John and Jane Q. America what they think about the glitz factor of the dinner, but we do know it makes more of them tune in. Maybe it’s just to sneer at us, but maybe some of them tune in to see Kim Kardashian, and come away slightly more engaged with the political media. Maybe the already-engaged tune in to enjoy the night vicariously, the one night of the year when Mark Knoller is as likely to be recognized as Justin Bieber.

Most White House reporters are not rich celebrities themselves, and do an incredibly hard, thankless job, and they enjoy the one night a year on which they get much-deserved recognition. Just ask them. One year, I also decided to guilelessly ask some of the celebrities in attendance why they wanted to go to the dinner, and a few got a little offended, as if the event itself wasn’t worthy. For every celeb who just wants to be seen, there are several others who really take an interest in what we do, and who we do it to. As Ed Henry points out every year, the WHCD is also a charity event that awards needed scholarships to aspiring young journalists.

But I’m not gonna front; the WHCD parties are a blast. I can see how they’d be tiresome for someone like Tom Brokaw, but I don’t actually get out that much. Aside from getting to meet the likes of Mr. David Effing Chappelle, the annual event is a bit like summer camp, where I get to reconnect with people I haven’t seen in a very long time. It’s also a chance to get valuable feedback from the media and political figures we cover, and to give them feedback, as well.

One of my fondest White House Correspondents’ Dinner memories, though, was from one of the 2011 after-parties. I was wandering around the crowded, Excedrin-loud place, looking for anyone I might know, when I spotted ABC News Radio correspondent Ann Compton, whom I usually would see tucked away in the back of the ABC booth at the White House, toiling away. On this night, though, she looked like a movie star, with a smile to match. She introduced me to her grown son, who beamed with palpable pride, and I took a picture of them that, regrettably, turned out to be too dark to see anything. We chatted for a few minutes before I went back to making the rounds, but Ann’s weightlessness that night stuck with me, because she deserved the hell out of that.

I look forward to the day when we both find the whole thing tiresome, but for now, I’m going to enjoy it. As HuffPo‘s Jon Ward aptly put it, “I like parties. Parties are good. People who get all tense about parties maybe need to go to more of them.”