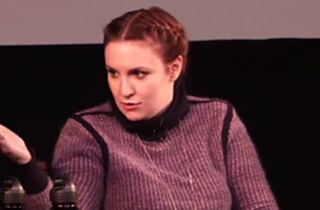 During a panel discussion at Sundance about the representation of women in comedy, Lena Dunham deftly illustrated the double standard that she’s held to as someone who creates and stars in her own TV show: women don’t get separated from the characters they play, whereas men like “real perv” Woody Allen do.

“There’s a reason people have a problem differentiating between me and my character,” Dunham noted, pointing out that the two “basically” share a name and are similarly styled. “But at the end of the day, I don’t think Larry David or Woody Allen, or anyone else playing a version of themselves, is walking around with a million people thinking they understand them on a deep and abiding level.”

For instance, here’s a dude who makes movies about incredibly young women, and who has been accused of child molestation, and married his adopted kind-of daughter. Via VH1:

“Woody Allen is proof that people don’t think everything he says in his films is stuff that he does because all he was doing was making out with 17-year olds for years and we didn’t say anything about it. No one thought that Woody Allen is making out with a 17-year old in “Manhattan” and, said, I guess he’s a real perv,” Dunham said. “And then lo and behold…” Wiig finished Dunham’s sentence with a sarcastic, ‘He fell in love’.”

On the other hand, Dunham will be remembered as the girl who claimed she was “a voice of a generation,” even though, Dunham points out, the person who said that was a fictional character: “She falls to the floor high on drugs…I’ve accepted that, for better or for worse, it’s going to be on my tombstone.”

Watch below via Sundance (discussion starts 37 minutes in):