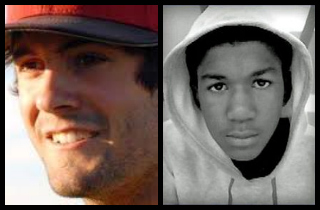 It’s the new normal in media.

No, not the high-quality discussion on race relations we’ve seen this summer (which haven’t made tensions exceptionally worse or anything…)

No…not playing the race card from the bottom of the deck (if this was a blackjack table at Caesar’s, we’d be on our fourth shoe by now).

Instead, in light of the Chris Lane murder, a murder that–in a truly just society—should put the three responsible in front of a firing squad (with their back turned) to permanently cure themselves of their self-described boredom…the new game in the world of media is something I call race-crime-counting.

As reported here, the Zimmerman trial provided ratings bumps for MSNBC/Fox (modest) and CNN/HLN in an otherwise-uneventful summer for cable news in a non-election year. The story captured a larger audience because it allowed the media to do what it does best lately: Compel viewers at home to emotionally take one side (Zimmerman camp or Trayvon camp) and let the loud, passionate, (and therefore cheap to produce) debates dominate the 24/7 news cycle for months on end from there. And in the process (with a few exceptions), the dialogue—at least the way it played out on TV–help set race relations back to sometime around 1965.

Via MSNBC’s Al Sharpton before an ounce of evidence was presented in a court of law:

Cartoon characters like Sharpton and newspapers like The New York Times ultimately needed a chiropractor to bend over super-backwards in turning the Zimmerman case into a racial one. Hispanic-on-black-crime isn’t contrasting or catchy enough, you see, so the “White Hispanic” race was magically created to turn George Zimmerman into Tim Tebow. *Side note: Hopefully I’m not convicted of a high-profile crime anytime soon (only a 47 percent chance, according to Nate Silver), because with a name like “Concha” (Spanish/Basque descent), I might be eligible for White Hispanic status, too.

Anyway, when the trial finally appeared in the rearview mirror a few weeks after Zimmerman’s acquittal, August arrived. Know this: August is the worst month of the year for television news from a ratings perspective. The reasons are obvious (end-of-summer vacations for viewers and politicians alike). The last few Augusts have produced hurricanes or political conventions (or hurricanes heading toward political conventions) to keep ratings up, but this year is a quiet one on the weather front, hence the drops across the board. Until…

The Chris Lane murder opened the door to a racial narrative again, but this time—according to media on the right–in reverse of the Zimmerman-Trayvon narrative. On cue, conservative media seized the opportunity to point out the hypocrisy of the left.

Here’s Rush Limbaugh on his radio show earlier this week:

“It’s worse than a double standard. This is a purposeful, willful ignoring of the exact racial components, but in reverse, that happened in the Trayvon Martin shooting…From Obama on down, didn’t care about Trayvon Martin. All that mattered was that incident offered them an opportunity to advance a political agenda.”

Limbaugh also slammed the media for not centering on the “racial component of any of the people involved in this.”

Following the Lane killing this week was the brutal beating murder of an 88-year-old white World War II veteran (Delbert Belton) in Spokane, WA. Police say both suspects are black, with one already in custody. It was the lead story on Drudge Thursday night.

This death–equally as tragic and utterly senseless because each victim didn’t have a chance (shot in the back) or the ability (very advanced age) to defend himself—will also receive much more attention than usual because of the race-counting competition that is now part of the daily diet the media has grasped to fill the dog days of August.

In tallying up the scoreboard, the way conservative media sees it, the race-crime-counting score is now 2-1.

Both sides don’t actually care about the victims, of course…they’re just pawns in the game of gotcha.

40 people per day are murdered in the United States.

That’s far too many crimes for the national media to keep up with.

But if it’s a white-on-black crime…

Rest assured, the folks that bring you the news will do everything they can to make sure you hear about it.