Limbaugh: Dana Bash Was on Harry Reid’s Side Before He Insulted Her
audio

Limbaugh: Dana Bash Was on Harry Reid’s Side Before He Insulted Her 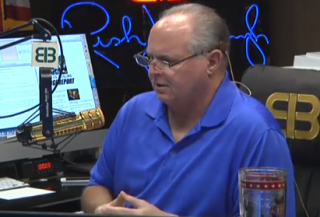 Conservative radio host Rush Limbaugh dug into controversial comments made by Senate Majority Leader Harry Reid (D-NV) on Wednesday in response to a question from CNN reporter Dana Bash. Reid called Bash “irresponsible” and “reckless” after asking if the Senate would pass a special bill to restore funding to the National Institutes of Health amid a government shutdown. Limbaugh asserted that Bash, who was sympathetic to Reid’s position, was made less so by the senator’s comment.

“The House is presumably going to pass a bill that funds at least the NIH. Given what you’ve said, will you at least pass that?” Bash asked in the question which set Reid off. “And if not, aren’t you playing the same political games that Republicans are?”

“Even in her question, she savaged the Republicans,” Limbaugh said. “The premise is that Republicans were playing political games with the lives of children. How much more biased could you get?”

“She is totally on his side throughout this question, except when she says ‘If you can help one child who has cancer why wouldn’t you do that?’” the host continued.

Limbaugh mocked Bash breaking down in tears after being admonished by Reid for asking the question she did. He added that Reid’s “meanness” and “heartlessness” came naturally to him.

He played a clip of Reid telling liberal radio host Bill Press that the trap the GOP had set for him was to fund every aspect of the government separately in order to remove funding from the Affordable Care Act.

“This is a mean, vindictive, partisan little man,” Limbaugh declared.