Limbaugh On How Obama Campaign Views Women: ‘You Are A Vagina, You Use It Multiple Times A Day’
audio

Limbaugh On How Obama Campaign Views Women: ‘You Are A Vagina, You Use It Multiple Times A Day’ 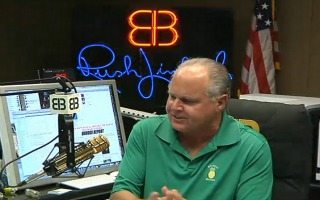 During his syndicated radio show this afternoon, conservative talker Rush Limbaugh gave a colorful explanation for his belief that the Obama campaign sees women simply as “a vagina” and their appeal to the gender’s vote is based solely on the desire to use their vaginas and get free stuff as a result.

He told his caller Beth that this is how the Obama campaign views female voters: “You are a vagina, you use it multiple times a day and you want someone else to pay for the contraception so that you can use your vagina every day. And then when the contraception fails, you want an abortion, and you want somebody else to pay for that. I’m your guy. Vote Obama.”

“I wish I had time to use my vagina multiple times a day. But unfortunately, due to this economy, I’m working probably 15 hours a day,” his female caller responded.

“That’s why it’s insulting,” Limbaugh agreed. “They treat women as though — one dimension. Want everything free. No responsibility in your life. You want to accept no consequences for any of your actions. You want to be on welfare. Your derelict husbands don’t love you. Only Obama and government does.”

“That’s their appeal to you,” he concluded, “plus the vagina stuff.”