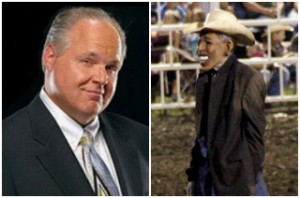 The conservative backlash to the liberal outrage over a Missouri State Fair rodeo clown dressed as President Obama reached The Rush Limbaugh Show Wednesday. Rush Limbaugh called the condemnation of the performance “no different than those countries reacting freakishly when there were cartoons of the Prophet Muhammad.”

“It is as though President Obama is a messiah or is a god,” Limbaugh continued, “and this little thing that happened at the Missouri State Fair is a defamation, a denunciation, almost a religious sacrilege that took place.” He argued that presidents get made fun of all the time and that should be no different with the first African-American one. “You people on the left, who the hell do you think you are?” Limbaugh asked. “You can’t laugh. You can’t take a joke. You can’t take a punch. You can’t take anything.”

Limbaugh also went after Obama himself for not rejecting the criticism of the rodeo clown. “If I were the president of the United States and this was happening in the country that I was president,” he said, “I would put a stop to this.” He added later, “The next time I was on TV, I’d reference it. I’d have a smile on my face, I’d laugh about it, and I’d have everybody calm down.”

“This is no different than what happened in all those countries that had the cartoons of the prophet and militant Muslims had a cow over it, went nuts. It’s exactly what’s happening here. What do we have, a president of the United States who is above all this? We have a president who’s above criticism, above being mocked, above being laughed at? We have not just a president, we have an entire Democrat political party and the American left which thinks that they are so damn special that they cannot be mocked, they cannot be made fun of.”

Since the initial incident, the Missouri State Fair’s commission has banned this particular rodeo clown from the fair for life and ordered all future performers to attend sensitivity training before they are allowed to appear in the annual rodeo.