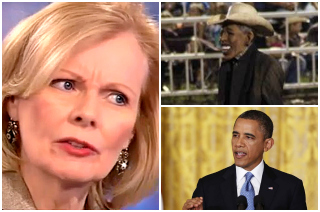 Peggy Noonan’s latest column is a peanut butter cup of concern-trolling. Noonan layers a critique of Obamacare—fair!—within a strange call for President Barack Obama to defend those involved in the Missouri State Fair rodeo clown snafu, to demonstrate his tolerance for taking criticism on things like health care. Unlike a peanut butter cup, this does not work.

Suggesting that Obamacare was “part of why people wind up making fun of the president at state fairs,” Noonan counseled:

“Let me suggest a classy Obama move that might go over well. From his Vineyard vacation spot he should have the press office issue a release saying his reaction to finding out a rodeo clown was rudely spoofing him, was, ‘So what?’ Say he loves free speech, including inevitably derision directed at him, and he does not wish for the Missouri state fair to fire the guy, and hopes those politicians (unctuously, excessively, embarrassingly) damning the clown and the crowd would pipe down and relax. This would be graceful and nice, wouldn’t it?”

“Unctuously, excessively, embarrassingly” doth protest too much. Two politicians have condemned the rodeo clown, Claire McCaskill, and a state GOP official who said “We’re better than this.” Both of them did it in under 140 characters, or less than the length it took Noonan to melodramatically deride them.

“[Obama] would never do it,” Noonan bemoaned. “He gives every sign of being a person who really believes he shouldn’t be made fun of, and if he is it’s probably racially toned, because why else would you make fun of him?”

Yes, why else would you mock him? Noonan was on the Sunday talky shows last weekend, so she may have missed Donald Trump digging up birtherism’s corpse and swinging it at a hapless Jon Karl, suggesting that five years into Obama’s presidency his nationality should still be suspect because…well, Trump doesn’t feel the need to state the reason. Who’s filling in the blanks here?

At least one fellow scribe saw a problem with Noonan’s advice:

@Peggynoonannyc You understand that if Obama held a press conf about a rodeo clown, people would think he'd lost his marbles, don't you?

Marbles, indeed. We actually got a press conference from the president last week*, and its main takeaway, since nobody really gives a Clapper about surveillance, is that the president is quite confident in the Affordable Care Act, to the point of daring the GOP to run against it. Obama has no problem with taking criticism; he’s inviting it. The rodeo’s happening around him.

* More of those, please.