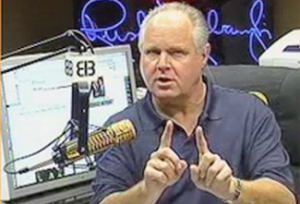 Rush Limbaugh made headlines once again yesterday, for questioning whether it was “accidental” that the villain in the new Batman movie is named “Bane” — given that Bain Capital is the firm Mitt Romney is controversially linked to. Reactions ensued! Ridicule commenced! Limbaugh took notice and addressed it on Wednesday, clarifying his comment, asserting that he did not say there was any sort of conspiracy.

Everybody’s out there running around saying I got this giant conspiracy theory that the Batman people, the creators, the comic book creators, created this thing to campaign against Romney. I never said that. I didn’t say there was a conspiracy. I said the Democrats were going to use it, which they are. Jon Stewart’s harping on it.

He continued his defense by noting that yesterday he said the rich hero Batman is more like Romney and “that the Bane guy seems more like an Occupy Wall Street guy.” All he said, Limbaugh clarified, is that Democrats would try to make that connection between the movie and Romney. The Batman movies’ themes tend actually to lean conservative, he observed, in terms of right/wrong and good/evil.

The truth is the truth, Limbaugh said, coming back to his central point that President Barack Obama running a campaign against capitalism.

The remarks that elicited the media frenzy:

“Do you know the name of the villain in this movie? Bane. The villain in The Dark Knight Rises is named Bane, B-a-n-e. What is the name of the venture capital firm that Romney ran and around which there’s now this make-believe controversy? Bain. The movie has been in the works for a long time. The release date’s been known, summer 2012 for a long time. Do you think that it is accidental that the name of the really vicious fire breathing four eyed whatever it is villain in this movie is named Bain?
…
You may think it’s ridiculous, I’m just telling you this is the kind of stuff the Obama team is lining up. The kind of people who would draw this comparison are the kind of people that they are campaigning to. These are the kind of people that they are attempting to appeal to.”

Listen to Limbaugh’s reaction to the reactions below: