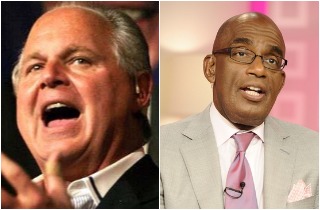 Rush Limbaugh really took issue with NBC’s Al Roker on Thursday, pointing specifically to a remark he made on Today about global warming. Tearing into both the segment and the global warming “hoax,” Limbaugh deemed Roker “proof positive” that there’s no “intellectual presence” at NBC. Oy.

While he’s well aware of the “blatant assumptive stupidity out there,” Limbaugh still found the remarks mind boggling. In a story about conspiracies and crazy thing people believe, the folks at Today took note of the part that said 37 percent of Americans don’t believe in global warming. “They think it’s a hoax,” Roker commented. “I mean, two words: super-storm Sandy.”

Right off the bat, Limbaugh dismissed the environmental concern, stating, “Everybody knows the manmade global warming thing is a hoax. … The whole thing is made up. It was phony from the get-go.” Roker doesn’t even read, nor is he curious enough, he added, to read up on the studies rejecting it.

Limbaugh then went on to hold Roker up as an example of “problematic” journalism, the kind that is leading people to be “ill-educated” and dumbed down.” But he didn’t stop there.

In the olden days, Limbaugh reminisced, those who appeared on television were required to meet certain requirements and be more knowledgeable than their viewers. Now, it’s “breathtaking to behold,” there are virtually no barriers to entry.