Lindsey Graham Asks ‘How Many of You Are Democrats?’ and Bush Raises Hand 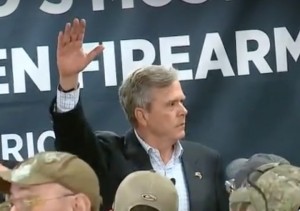 We’ve already established that I am a Jeb Bush apologist. Gaffe after gaffe, even after he called in his mommy, I have defended Bush and insisted that he is just a candidate with an unorthodox way of getting to the top. This time, though, even I am scratching my head.

I heard what you all had to say the last time I defended Bush; I read your comments and tweets. I know that for a lot of Floridians, he is deeply unpopular. To LGBTQ residents of the state, in particular, his embarrassing campaign can feel a little like karma for his actions against that group while he was governor. I heard that loud and clear and totally get it. Still, there’s something about this guy that makes me feel personally let down every time he screws up. I think it’s that impish little face.

Here is that face and the body it is attached to doing something that is beyond even my understanding or apologia:

Yes. You saw that correctly. During a town hall in South Carolina, Lindsey Graham asked, “How many of you are Democrats?” and Bush went ahead and raised his hand, then looking around coyly.

There has been a lot of talk about Bush wanting to separate himself from his family ever since he failed to include his last name on early campaign promotional materials, but I just don’t think this is an advisable way to do that.