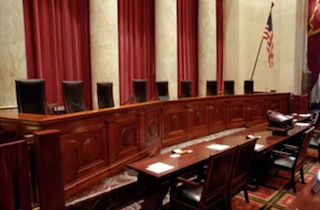 We won’t know the Supreme Court’s decision on the Defense of Marriage Act until this summer, but until then, we can pore over today’s oral arguments. Much of the media consensus appears to be that the court was “skeptical” of DOMA’s constitutionality. Take a listen at the full audio and decide for yourselves.

“Skepticism” and “trouble” are already descriptors of the justices’ sentiments toward the anti-gay marriage legislation. Which is not to say the arguments didn’t elicit criticism and disagreement as well.

For example, Chief Justice John Roberts questioned President Obama for believing DOMA is unconstitutional while still his actions aren’t “consistent” with that view. “If he has made a determination that executing the law by enforcing the terms is unconstitutional, I don’t see why he doesn’t have the courage of his convictions,” Roberts said, “and execute not only the statute, but do it consistent with his view of the constitution, rather than saying, oh, we’ll wait till the Supreme Court tells us we have no choice.”

Justice Antonin Scalia, too, held this criticism of the White House’s handling of the issue. “I’m wondering if we’re living in this new world where the attorney general can simply decide, yeah, it’s unconstitutional, but it’s not so unconstitutional that I’m not willing to enforce it,” he said. “If we’re in this new world, I don’t want these cases like this to come before this court all the time.”

Listen to the full audio below: